I really liked Thief when I saw during the Taipei Film Festival. Jay Chern, the director, had been working for Johan Ku on the video installation of The Hole, so he invited Johan and me to attend a screening of his short film.
We went to the Bar Code to celebrate, Jay, the premiere of his film, Johan and I, the opening of the Stay Real Dream exhibition. Jay came with CJ, the producer of his film, a charming young girl who is actually a theatre director. We quickly got into deep discussion about music, film, theatre, creativity...
CJ had written a thesis on a Norwegian playwright, Jon Fosse, directed one of his plays, and met the man - when it is a known fact that he would seldom meet total strangers.
When I told CJ about Devant mes Yeux/Before my Eyes, the play I had been having in my mind for many years already, she said there were many similarities in the themes between what I had told her and Jon Fosse's plays. I shall have to read some of them.
But I think I have found the director for my play! I have to find the time to pen it.
CJ wrote back to me a few days ago to say that Jay may need my help for Thief.
It turned out that Jay may have some copyright problem with some of the music he had used for the soundtrack. He had indeed been granted the permission to feature Ella Fitzgerald singing But not for me, but the permission apprently only applied for theatrical distribution. Now that the film will be showed on TV, it doesn't apply, whence their call for help.
And said yes.
"Even when I have too many projects, I still say accept new ones" I joked. CJ laughed when she heard that.
"And it's not until the deadline approaches that I start to freak out. But I still say 'Oh, yes, I can do it!"
And I said yes.
I will have to write a jazzy number and some incidental music. Jay will send me the film and discuss the scenes.
We were talking as we were munching on fairly big-sized burgers at a burger spot which CJ had picked, called An Burger...
This restaurant is famous for its giant hamburger dish that the staff challenges the customer to eat within less than one hour. If he succeeds, then it's on the house. And if the he succeeds in less than 45 minutes, he's given 300 $. Needless to say no one has managed to win: the hamburger itself has 4 pounds of meat, to which one has to add 2 pounds or mashed potatoes, 2 pounds of French fries, 1,8 liter of coke and a plateful of fried brownies - we tasted them, they're awful!
Not unlike one of Hercules' twelve labours! 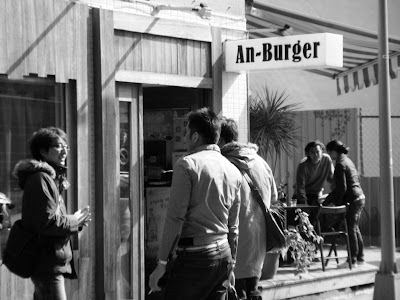 Watch: The Hole (Variation One)
A conceptual short, part of a series of 7 videos directed by Johan Ku for his 2011-2012 A/W collection.