I hear people speaking French next to me. The airport speakers are playing Christmas songs. I marvel at how arrangers can still find something original to do with these exhausted songs. I passed earlier on a group of tourists all of them wearing a Santa hat with blinking stars on it. I wonder what the atmosphere will be in Paris. I wish I were cunning enough to be away from all this jingle jungle as I have been last year.
I was in Saigon. My cousin had prepared a Christmas meal Vietnamese style, which means that there was absolutely nothing Christmasy about the food. The evening ended at a trendy lounge bar near the opera house, in the company of a couple of friends and some uproarious high class hookers who had had their whole face and boobs redone and who were telling hilarious stories about some of their clients.
There‘s this slight sense of frustration when I think about this week in New York. I imagined a perfect week with a couple nights out at the theatre, nice dinners and drinks with friends, afternoons spent  walking on the streets and taking pictures, maybe a few exhibitions. Kristin Scott-Thomas was said to be fantastic in The Seagull and I could not wait to see that, David Bowie was having an exhibition at the MoMA. I imagined some wild nights at the club, fantasized about hot encounters with handsome strangers. All I managed was The Day the Earth stood still, a dull and uninvolving remake of the Robert Wise classic. How Keanu Reeves chose to play in this film is a mystery. How I ended watching this film instead of Slumdog Millionaire or Charlie Kaufman’s Synecdoche is another mystery…
It’s quite strange to see how more and more remote Reeves looks on screen as the years pass by; the same quality I find in Gene Tierney, as if some deep wounds are swallowing him inward. It was already quite obvious in A Scanner Darkly, now it’s even alarming.
That film  wouldn‘t be a good candidate to save the week. I did steal a couple of hours here and there from my friends. All of them were busy or did not even get back to me. The friend who hosted me was nice but high maintenance. When I expected a quiet person with a good sense of self confidence, I met a delicate spirit much too eager to please and constantly asking for attention. It’s strange trap to be invited to stay at someone’s place and have to walk on eggs all the time even if everyone tells me to make myself at home. There was a big dichotomy between the words and what I actually felt. Add the Christmas frenzy and this week in New York was more like a strange nightmare. But the sight of the impressive architecture was enough to make me happy.  I was stunned to see all the changes since my last time here! They must have some warlocks working for them.
The other highlight was to see Kristina and Beppe again. Kristina is going through a tough and confusing time at the moment. She has left her long time companion Philippe - I shall miss the giant he was and the bon vivant who would come to Paris with his excellent wines... Work but nothing that exciting. How come such a beautiful dancer doesn't find a Pygmalion to create works worthy of her??? She has to teach monkeys and grab whatever she can. Ah, la vie d'artiste!
Her new beau is a Greek hunk who seems as confused as she is.
In spite of all that, we all remained confident about the future. We are doing what we love. We are travelling around the world and manage to see each other wherever it is. Isn’t it a wonderful life? The difficulties we encounter we meet amount to nothing much when we see what we have achieved.
And the new year will be even better, and certainly filled with many surprises.
Where will I be? Whom will I meet? Whom will I love? What will the next projects be? To what destinations will I travel? And will I finally settle somewhere out of France as I feel I must do?
I don’t know and I’m happy not to.  Hurrah! 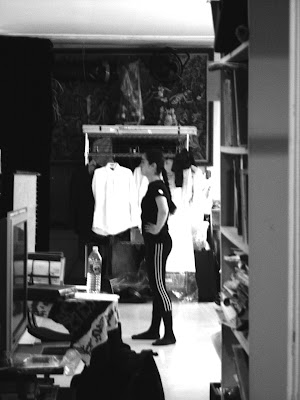 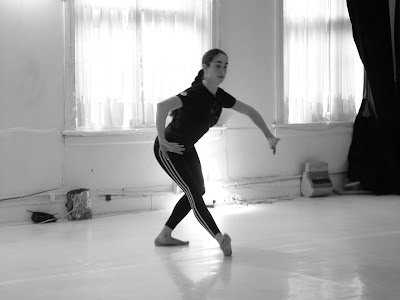 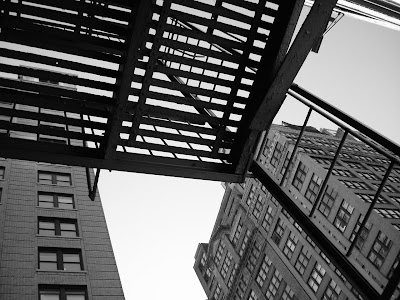 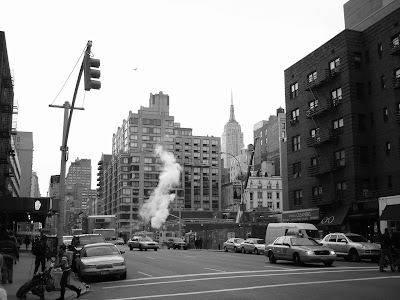 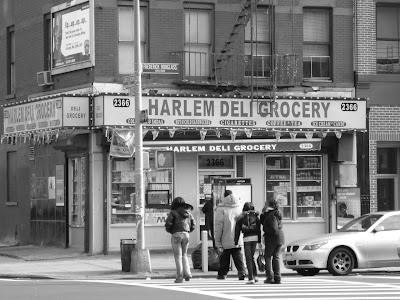 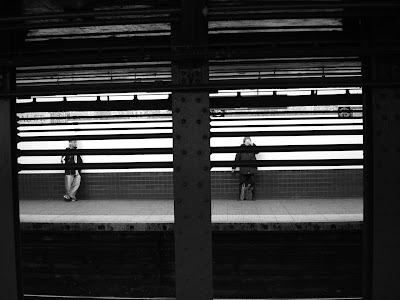 To be in New York is such a joyful experience that no word can describe. It may be cold, snowy, windy or rainy, I just don’t seem to notice. I am simply filled with excitement and happiness. No other city does this to me. Or maybe should I say that each city does something different to me.
I thought this trip would be a wild and sexy one, but it turned out to be quite the opposite. I hardly go out if it is not for a meal with friends. A frantic and tentative stumble that was stopped midway. 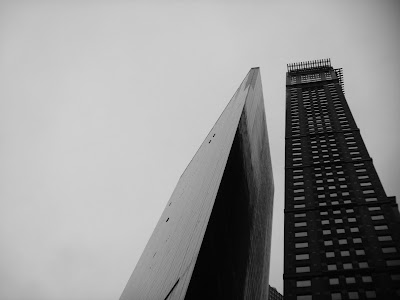 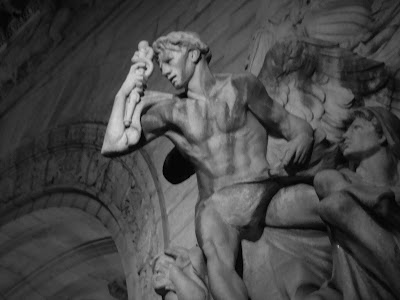 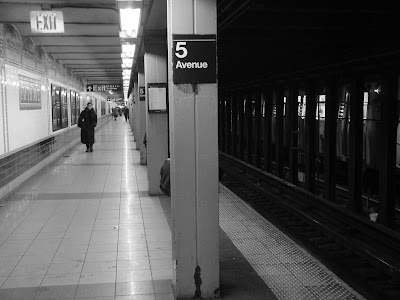 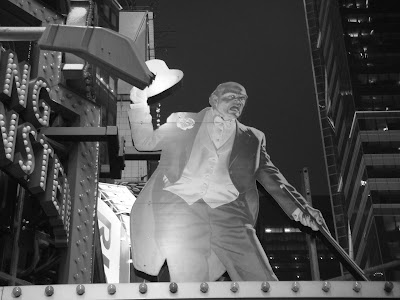 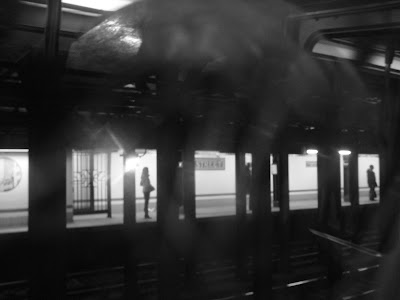 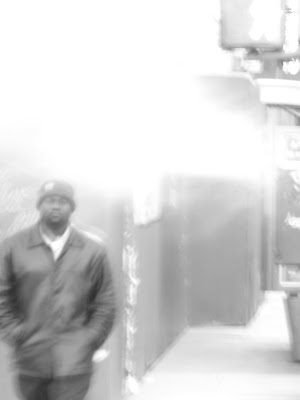 Toronto now. Lara lives in a former working class area turned hip. Like in all of the big cities, these areas were looked down until artists, musicians and fashion designers would start to flock there because the affordable living inexpensive housing. Galleries, designer’s shops, trendy cafés and restaurants would open every week. A Golden Age would then begin for five or six years until the interest of the mainstream invasion takes place, unavoidably boosts up prices and ironically compel these artists to leave for another part of town - a cheaper part of town.
My first good film in months: Milk. A wonderful performance by Sean Penn. He is the best American actor.
Whilst waiting for the laundry to be done, I wandered in Lara’s neighbourhood and discovered many interesting galleries. One was displaying picture by former 60’s model Pattie Boyd. Photographs of her then spouse George Harrisson, Eric Clapton and other fellow musicians from that era. The best shots though came from her travels in Asia.
I was glancing through the window pane and about to leave when the owner of the gallery, a friendly man in his forties, who looked like he had just been sent back from Woodstock called me and invited me to have a closer look inside.
Since the photographs were of musicians, the conversation was about music. And when he learned I was one myself, he promptly offered his help.
‘As a point of fact, I’m looking for a lyricist’ I told him.
In no time, he came up with names, took my phone number and e-mail address and promised to get back to me.
Even if nothing happens, I was delighted by his kind and convivial attitude.

I'm so happy to stay with Lara. I couldn't possibly not visit her, when I was so near by. I had missed her presence immensely since she was more or less compelled to leave France and return to Toronto.
A difficult decision. We even thought of getting married so to get her the papers. But y intuition told me that she had to face that side of her life: family, a decidedly overwhelming mother, her career. France didn't bring her what she had hoped for, even if she loved the life there.
Now it seems her life has started to take off. She's working again in theatre,she's writing again, some interesting offers are coming to her, and most importantly, she has faced her parents and settled for what she is.
And - something not totally negligeable, she has found love...

Email ThisBlogThis!Share to TwitterShare to FacebookShare to Pinterest
Location: Toronto, ON, Canada