One glance on my left and I see big fields of clouds. I never get tired of contemplating them. Unexplored territories, ever changing, like our imagination.
I'm flying to Hanoi from where a car will drive me to Ninh Bình, where they're filming Between Shadow and Soul. I need to immerse myself in the landscape of what they call the Ha Long Bay on land. Not enough time to give much thought to the film. Only a few musical sketches that quickly passed my mind without leaving a very deep imprint. I feel slightly nervous, naturally, as the project is the first real long feature film I will be scoring for. The four previous ones I did in Taiwan didn't lead to much: one film which was never completed, much less released, three made-for-TV films, two of them directed by Jay Chern. But I saw them as good practice. I know what to do, and what not to do.
Now Ninh Bình... And also to see Thọ again. He was the force that supported me during the past weeks of hardship with Sébastien and that woman Sylvie, as we were tirelessly working on the [FEEL] in/out 2016 event. Just knowing that Thọ was thinking of me and eager to see me again was enough of a thought to soothe my mind and boost my perseverance. Just a few hours before we lie in bed together again and drink each other's presence. 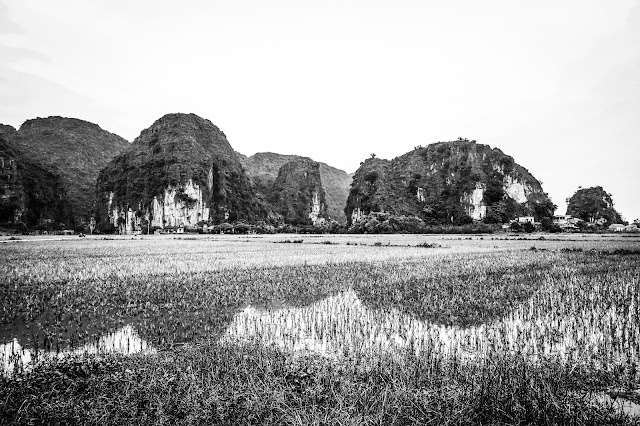 I just came back from Ninh Bình, a small town in the north of Vietnam. It is past midnight now in Saigon. A GrabBike has just dropped me in front of 75 Trần Quốc Thảo, where I have been staying for a little more than a week. I feel contented, hopeful and resolute, confident that things are now going to be great again and end 2016 on a hopeful and brighter note.
A few days ago, I met with the producer of a new long feature film called Giữa bóng tối và tâm hồn (Between Shadow and Soul) that is currently being shot in Vietnam. As I read the first email she sent to me, I was surprised to learn that it was Trần Anh Hùng who suggested that she contacted me.
He apparently is supporting the project and his wife, Yên Khê is playing one of the leading female roles. A film supported by them could not be a bad one!
The first encounter went very well. I felt like stepping through that door. The story, about a fourteen-year-old young bride who has to face premature adulthood and married life deeply struck a chord in me. Ngọc, the producer suggested that I took a day or two and come meet the director, Phương Anh, who goes by the name of Ash, as well as the whole team. It didn't take long before I accepted the offer. We had not really started anything for the [FEEL] in/out event in Saigon. I had time.
Called the Ha Long Bay on land, Ninh Bình  is breathtaking. I think I have found the place where I will spend my older years.

Just two days to meet Ash, the director, the whole film crew, the actors. They had been filming for about three weeks already. I was driven to a hotel by a road. I had been dozing on and off on the way from Hanoi, occasionally waking up to see an eye catching landscape, a small village, rice fields or mountains in the background...
Large hotel, fairly new, looking like so many hastily built hotels to accommodate a growing number of tourists.
"We will meet at three to go to the site. There will be a ceremony because Tina, the assistant director saw the ghost of a little girl sitting on the bed in one of the houses where we will be filming tomorrow..."
A perfect way to start...

And I'm also happy I found the time to pay dear old Tim a visit at the hospital. I really feared for his life and was glad to see he made it through, even if his state of health if far from stable.
That man is really an adventurer. From Australia which he hates, to years in Hong Kong, and now in Hanoi with this young lad...

It seems that the giant outdoor karaoke in the hotel courtyard will last the whole night, although at this rate, with all this off-key yelling, their vocal chords will perhaps beg for mercy very soon. Despite that, I find this youthful ebullient joie de vivre very charming.
What is less charming is to get up early tomorrow for a shooting at 5:45 a.m. ...