Working on the Bruce Lee documentary... To compose for a documentary is of course totally different from writing for fiction films. And then, there are so many kinds of documentaries. I particularly like those that are based on facts but allow the audience to think, hope and imagine. Lee Yong Chao's Blood Amber, Wang Jiu-Liang's Plastic China or Hendrick Dussolier's Last Days in Shibati are some fine examples. The characters are real life characters, however, the audience cannot help but enpathise and identify with them, and somehow, reality becomes fiction - despite the film being a documentary, isn't it fiction, when facts and events are filmed a certain way, when framing, light and cinematography have to be taken into account? It is my belief that once something has been lived and is being told, whether in words or images, then processed and edited, it can no longer be called 'reality'. But when the documentary tackles on a topic of a legend such as Bruce Lee, there's little room for interpretation. One has to be as truthful as possible. One has to give facts and organise them in such a manner that they feel like a faithful account of what has happened. Perhaps that's why I never really liked the biopic genre. To see an actor trying to channel somebody else may be interesting for drama students, but the film is seldom arousing as a piece of cinema. There are exceptions, Leto, being one. Serebrennikov transcended the material and gave us a stark and beautifully lensed black and white film. But then, Viktor Tsoi is not a world famous rock legend, so it was easier for me as an audience to just let myself go with the flow of image, story and music. The case of Bruce Lee will be a challenge. What can Bao say about it that hasn't already been said one million times? Bao told me that he wanted to focus on the Asian perspective, and Lee's struggles as an Asian in 60's America. From what I heard, Bao has filmed lots of interviews of people who had worked with or been involved in Bruce Lee's life, co-stars, colleagues, martial arts students and... lovers. "Bruce Lee was a womaniser... But the most interesting details won't make it in the final cut, because they may shed a negative light on Bruce Lee" Bao said at some point. "Those things were said, but after the camera stopped rolling." I argued that this would indeed be more interesting than hearing the usual facts that other documentaries had already given. "His legacy is very well guarded by his daughter Shannon" Bao replied. "There are lines beyond which we cannot go". A respectful (and authorised) documentary it will be then - even more of a challenge to me.

I have tons of ideas even if they may be more suitable for my own interpretation of Bruce Lee. So I'm moving forward very tentatively, step by step.
There's this crazy piece I nearly finished, that describe the craziness of Hong Kong of the 70's, a mixture of erhu, big beats, a jazz combo and taigu drums - without sounding like a period piece.

I wonder what Goh Nakamura will be composing on his side of the planet - he lives in Los Angeles. I only heard a few notes from a tearful mini-documentary Bao directed about his life and condition as an Asian American. But that wasn't enough for me to have any idea of his musical style.

For now, I am reuniting with my partners in crime, Emily, Edric and the two Allen. 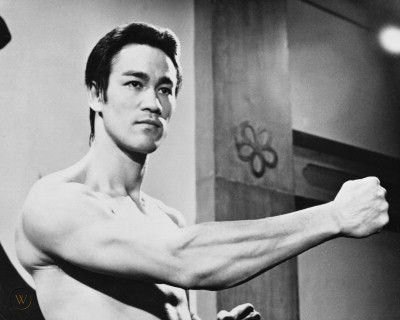 I did some photo tests with dancer/actor Benson Lee. My new short film, Rừng will be the second part of a diptych I started last year with Yet Untitled [redux] about time and memory, particularly the mental meandering when the memory has lost its way. And its necessary reconstruction as fiction, in creation.

Found this musical sketch that I scribbled down some time ago, and I have no idea what it was about, although I remember it was in Saigon in a noisy coffee shop....

Lots of projects this coming month: the score for the Bruce Lee documentary, songs to write and/or arrange for an album by a mystery Taiwanese singer - Sam only told me that he is a very good singer..., one first song to pen for Ash Mayfair's new film project Skin of Youth, as she will soon be filming a demo to get more funding, and ... my second short film.

Why do I suddenly feel like going to bed...?

I saw my nephew and my parents in my dream last night. Miss them very much. Hope to see them in Paris very soon - should be next week, if all goes well - on ne sait jamais avec moi...

into the realm of Bruce Lee

The month of August has started, and so have the new projects for the second half of 2019. Now I'm deep in the world of Bruce Lee (reading his writings, watching some of his films, listening to the soundtracks) for the documentary by Bao Nguyen an American director, also one of the producers who came during the post-production time to help finalise Ròm and get it off the ground.
The documentary will focus on the years when Bruce Lee returned to Hong Kong. At first, when Bao asked me, I wasn't sure I'd be the right person for this kind of project. Bruce Lee is such a legend that I was wondering what and how my music would fit in. Bao seemed to think that I could, because he wanted to focus on his inner struggles as an Asian actor in the 60's America.
I knew Bao had a very good visual sense, that it could be interesting now to tell that kind of story. Still it took me some time to make up my mind. Bao had mentioned certain things that put me off a little: the use of songs like My Way - apparently a Bruce Lee's favourite,  how he wanted to capture the aound and flavour of the area. Once again, I thought, if he wants that why does he ask me?
Then the challenge appealed to me. "Why not?" as I would often say.
On the second week of June, Huy organised a get together for the Ròm team after I finished my work on Thưa mẹ con đi. I was sitting next to Bao so I told him that I would be interested in working on his Bruce Lee project. He seemed a little embarrassed. "It's just that since you said you weren't sure you wanted to do it, I asked my friend Goh to write the score" he explained. Goh was a friend of Bao's and had worked with him on his short documentary projects.
"Could you both do an arrangement of My Way, then the producers and I could decide between the two of you." he added. I didn't quite like the idea of auditionning for it, but I understood that saying yes to me would put him in a tricky situation with Goh, so I suggested that we both would write the score together. "Brilliant idea!!" Bao was overjoyed and relieved.
I never did any arrangement of My Way, but there's already one first piece in the making...

It's quite a humbling experience when the whole house is shaken left and right as if walls and ceilings have become like rubber. The second shake was frightening.

For a second I really thought everything would collapse.