Confucius in the wee hour

The alarm clock rang at four in the morning. I was supposed to call Eric when I’d grab the taxi so he could tell the driver where the temple was.
But he didn’t pick up the phone. Certainly over-sleeping he was. The thought of going back home to sleep passed my mind but I discarded it. I was up now; I would find a way to go there.
I asked the driver whether he could speak English. He couldn’t. Then I tried to say the name Confucius in various manners so he could perhaps eventually understand what I wanted…
I mimed a praying person, the ceremony, the temple, the drums… It was four thirty in the morning, the only time of the day when the streets are really empty save for the Seven Eleven and I was standing in there miming words to a driver who was scratching his head to understand what I meant.
‘Ahhh! Kong Fu Zu!!!!’ I jumped into the taxi and was at the temple a couple of minutes later. I actually could have walked there! It was so close.
In spite of the early hour, the place was packed. People yawning, but patiently waiting in line, eating some snack or drinking coffee to wake themselves up. I was surprised to see so many young people. It felt more like waiting for a pop event than a religious ceremony.
The ceremony itself was naturally a rather solemn affair. We were all craning to catch a glimpse of what was going on. Luckily it was still early so the air was fresh. We would have all died, had it been afternoon.
I had no clue what was going on, but I was glad to be there.
As I rightfully guessed, Eric didn't wake up. He met me much later, for breakfast. 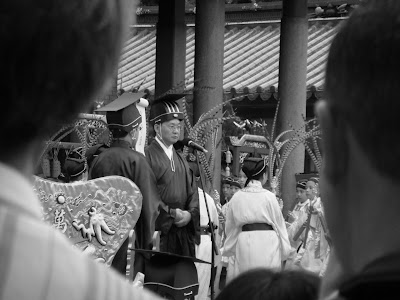 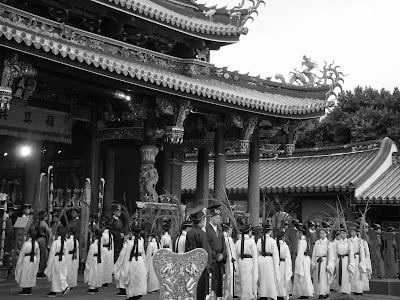 I had set my mind to go out clubbing tonight. Saturday night fever was the mood. Then Duncan sent me a message to suggest to go to the hot springwith him and Eric and there was suddenly no longer question about getting smoked at the whole evening with banging music in my ears, when I pictured myself  in a pool outdoor on the mountain. There was no question at all indeed.
It was well past midnight, yet the place was still quite crowded.
We ended our little escapade dumpling spot at a street corner. They were delicious.
All this doesn’t help the jetlag, but the joyfulness I feel knows no equal. 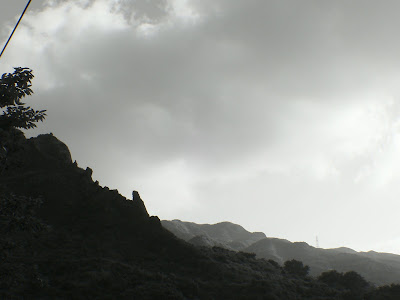 Improvise, go with the flow!
Posted by Aaken at 00:55 No comments:

It was dear ole Jan who offered to drive me to the airport. He had done so several other times when I was to leave for a few months. Nicolas tagged along as well.
We had a little breakfast at the Paul counter in the airport lounge. To my dismay, the prices had doubled compared to Paris. We sat at one of the few tables in a small space that had been arranged for customers. The metal bars around us made us feel like I was having a visit in a psychiatric hospital. Then the sight of two soldiers walking on either side of the space, carrying fire gun, made me feel I was in a military psychiatric hospital. Two waitresses dressed in white perfected the picture.
The flight lasted forever. I nearly felt sick with the nauseating smell of plane food and instant noodle soup combined with the constant shaking of the plane and the chilliness of my spot. Only the very friendly flight attendants made the journey bearable.
Twenty hours or so later, I was gladly walking out of the airport and grabbing a shuttle to Taipei City.
I was ‘home’. I left Taipei more than a year ago and it felt like I had just been away for a few weeks. I was glad to see these streets, the food stands, the people going on with their business, the ugliness of the city and the liveliness of its people.
A feeling that Kristina also shares. "What is it with this city…?" she asked as we spoke on the phone the night before I left. "It has nothing playing in its favour, but I just love it." she said. 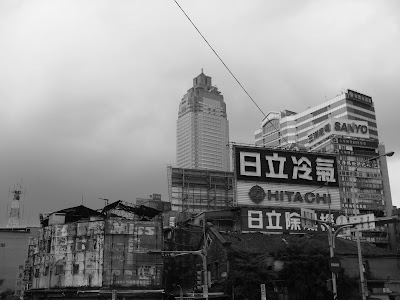 Yes the people. Ugly as it is, Taipei becomes beautiful thanks to its people.
Posted by Aaken at 01:01 No comments:

I have got everything: plane tickets, papers in order, Jason lets me stay in his flat in Taipei, I also have my multiple entry visa for Vietnam - just in case!. The Vietnamese government has issued a new law regarding the Viêt Kiêu, ie. Vietnamese who fled after or during the war as well as their family and relatives. All of them could benefit a four year long visa exemption for Vietnam. Those who had a full Vietnamese name would pay less.
I think of this family I met once at a cousin’s place. They had named their son Jeremy and snobbishly stated that they made a point in speaking only French with him because they wanted him to fully integrate the French society. That they had a very strong Vietnamese accent didn’t seem to matter.
"Good that I’m not called Robert Tôn Thât ", I joked with my mother.
"Just think if you had been named Leon…" she said smilingly.
I called Lucien and he gladly accepted to play the guitar parts for Butterfly Rider. I will come to his place on Monday. I’m sure the whole affair will be in the can in no time.
Even if I haven’t been able to sit down and work on my songs, they keep growing in my head. The way lyrics come to me is peculiar. A good line would pop up in my mind out of the blue, in the least convenient situation - when I'm having a conversation with mother nature in the loo, when I'm shopping groceries...
Sometime, just one line a day. At random, for any song.
Like finding a new path in the wood.
Posted by Aaken at 16:06 No comments:

Went with Bévinda to see Lucien Zerrad, her long time collaborator and composer, playing with his trio on stage at La Bellevilloise. The location wasn’t the best one - one has to earn the privilege to see it by cycling up a cruelly steep hill before reaching the venue. Paris is no mountain city, but that hill is certainly a good work out for leg muscles.
Poor Lucien had to play in the midst of a brouhaha of people talking, eating, laughing and drinking. Behind us, a man was sitting with his girlfriend and went on with the dullest conversation - or shall I say monologue, commenting on everything and everyone. Two beautiful blond little girls were playing and dancing right in front of the stage. One of them was particularly striking looking. More than beautiful, she had an adult expression in her eyes as if she had to grow older too quickly, something that reminded me of a young Jodie Foster.
"When a child looks like an adult, it means that there’s something wrong at home" Bévinda remarked.
I don’t know what it is to have a perfect childhood. There’s always something wrong. A little three-year old boy would join them occasionally and disturb the musicians by touching all the buttons, which caused Lucien to plead the parents to keep an eye on ’these beautiful children’.
"I touched the buttons!!!!" said the little boy proudly with a broad smile on his face as he walked past us.
I could barely hear anything. But I liked the music that managed to find its way to my ears.
It was Lucien's first concert months after a nearly lethal traffic accident that left him motionless in bed with many fractured bones and legs. A reminder that I should be grateful to be in good health and able to use all my senses.
One thing leading to another, I realized that Lucien would be the perfect man for my song Butterfly Rider. There’s a whole section where I need an oriental guitar, to create this vision of a very broad deserted land.
I will call him tomorrow to ask him whether he’d accept to play for me.
Posted by Aaken at 23:12 No comments:

Time is running out. I did a photo shoot with Mathieu today to have new material for the cover. I want a portrait to be the base on which the graphic designer would print an imaginary world. Now that nearly everyone goes for drawings for their CD artwork, I would like to approach it differently.
I haven’t stood in front of a camera for some time now. I was all stiffness and woodenness at the start. The same bloody no-expression expression I have. I didn’t know what else to do. Smile? No. Act? There was no scenario, no setting but the white background and a lamps beaming their warmth on my face.
I felt like a one trick pony. The first two pictures were good but the following forty pictures were of this Asian man with hidden expressions - and how much make up did I apply to hide signs of tiredness and sleepless nights…
The result was satisfactory in spite of the inglorious start. Mathieu was not very convinced. It would help to have some props and different costumes so I can be ‘in character’. Change your heart, change your mind. It’s time to get out of my little world. 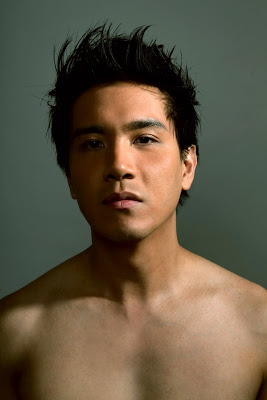 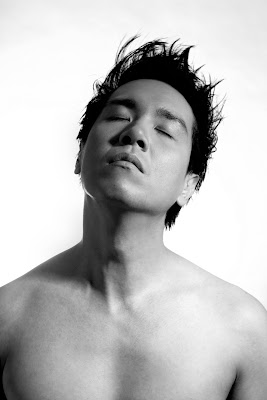 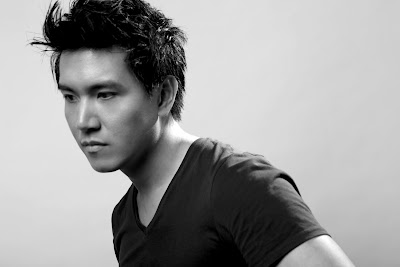 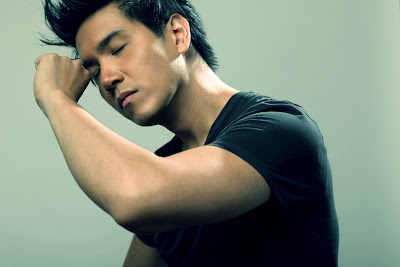 Saw my parents today for the last time before my trip to Asia. Shortly before leaving, I asked my mother whether she had any idea of a Vietnamese poem for one of my songs. I had written this short piece for cello and piano that I entitled The life before my eyes during my recording sessions with Karen in Chicago.
I played it to Bévinda who she suggested I used a Vietnamese text to create a nice contrast between the music which sounds very European and the lyrics. Then the whole summer passed…
My mother went to her library and came down with a small book a poetry by Xuân Diêu, one of the most important poets of 20th century Vietnam - he wrote around 450 poems… By my troth! When I think how laboriously I pen only one…
I immediately liked the one she chose: Tiên không loi, which, once translated could be understood as ‘a wordless sound‘. It’s so simple and most beautiful in its simplicity and goes with the music perfectly well.
Posted by Aaken at 21:38 No comments: