When my father came back from his second trip to Vietnam, after 20 years or so away from his homeland, he brought back a tape on which he had recorded a conversation with my mother's father.
For me it was a strange experience to hear for the first time the voice of a grand father I had never met - and would never be able to meet. He was then already very sick and weak, even though he sounded very lively and talkative.
For my mother, it was a devastating experience to hear the voice of a her father she dearly missed and hadn't seen for nearly three decades. It was a Saturday, after lunch. My parents were having their adult talk and I was still at the table with them, half-listening. Then the tape was mentioned. My mother insisted in hearing it, despite my father's weak protestations. She cried like I had never seen her cry before. There was nothing I could do to console her.
I wish to hear the tape, now. Nearly thirty years later...
I thought of that distant episode as I stood at the back of the funeral hall, listening to the three monks chanting the sutras, watching Pinga's parents saying farewell to her.
Her father made a very moving eulogy. He was standing in front of the altar with his wife, the sister and the brother on either side of it.
One of the things he regretted was to not be able to take his daughter to the southern island for her wedding as he had promised her. Now he's going to carry a picture of her and travel the world with her.
An orchestral arrangement of Chopin's 'Tristesse' Etude was being played on repeat at the end, when we all had to go by group and salute the family.
ChingYao, James, Thomas as well as a few other friends were there, our eyes all red with tears.
"I'm going more and more emotional as I grow older", I told James.
"Because we carry more as our life experience expands. We understand more what it feels like" he replied.
"To prevent myself from bursting into tears, I had to think of the most trivial things, like this woman's hairdo, the flower decoration, what this person was wearing... But it would only last for a few moment before I would get another attack..."
The ceremony ended with everyone walking one by one to the back of the altar and throwing rose petals in the coffin. Japanese pop songs were blasting out of the speakers. Pinga had been made up. So thin she was... The picture displayed at the altar was of a beautiful and smiling Pinga as we would or should remember her. For a second, I saw her face at the hospital and the pain she found hard to conceal.
Now she can go.
"I'm not afraid to die, I'm just worried that I won't be able to take care of people anymore" she had said.
Goodbye Pinga. 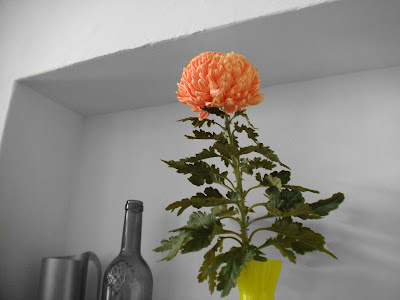 The afternoon demanded that I quickly shifted to another mode and another mood. I had seen FangYi the previous day and we both agreed that I would just do as I pleased for the music and then hand it to her to choreograph on it. I think it will help her structure the piece more tightly.
I didn't understand that she intended to make it in two parts, the first one being Oneness, and the other one - the more rhythmical one which also feature two hip hop dancers from Macau called Just.
I however suggested to make the two parts become one. After all, she came up with Oneness... She didn't seem to see how that was possible, but I shall show her in the music.
I extended Just with a new section which will be a dual between two taiko drums. I recorded them for Auntie three years ago, but never used. That section will be for the two hip-hop dancers. I saw a video of their rehearsal standard street dancing with the standard attitude and movements. FangYi didn't quite know what to do with them since they have no training in any other dance disciplines. To displace the urban flavour and set it in musical surrounding which has little to do with the hip-hop world.
I also showed FangYi videos taken during the rehearsals of Sur le Fil in Paris. She seemed almost relieved to see the possible ways she could take now.
I have to finish all the music before next week. And also this film score which is dragging on and on...

If the day started in mourning, it ended in sensorial elation.
Chubby gave me an invitation to attend the opening of this year's Taipei Art Fair. Hundreds of galleries from around the world - actually Asia, some European countries and a couple of US cities... Nothing very exciting under the sun (contemporary art fails seems to be a recycling of modern art, I find), lots of rubbish sold at outrageous prices as usually the case. So instead of looking for a captivating life changing discovery, I paid more attention to details. I get saturated very quickly when I go to museums. Each painting is like a life story which emanates very strong vibrations, as if they were living beings. After a encountering few of them, I'm exhausted.
My usual way in museums is to walk past the paintings as I would walk past people in my daily life, until I see one that catches my attention - one cannot talk to everyone at the same time.
Chubby works for Lin&Lin, arguably the most famous gallery in Taiwan. There was a corner which they turned into a private little salon: a vintage sofa, a wooden coffee table and a Zao Wou Ki painting hanging on the wall. Who wouldn't dream of such space in their home? I'm one of them.

Tsai Ming-Liang was there, of course surrounded by a herd of journalists, admirers and cameramen. Since his last film, Faces takes place in the Louvres museum, it was that film which he showcased.
One gallery which kept me watching each piece attentively one by one, came unsurprisingly from Japan. The Saihodo Gallery. When I'm rich I will... 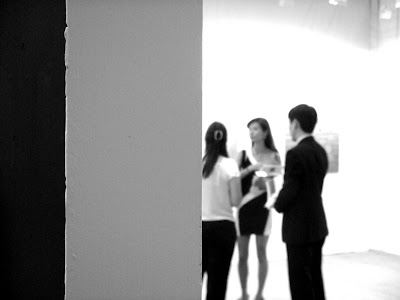 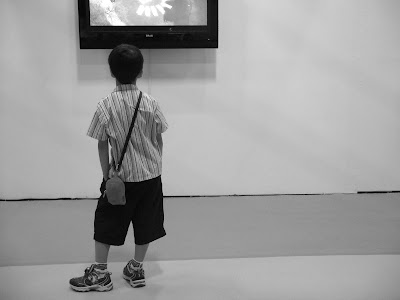 A photographer: Simon Chang. He did a whole series in Slovenia. He was there, commenting on his work. I had seen his book. I shall go to Eslite and get it!