So I will be doing the music for Johan's upcoming fashion show in Tokyo, this month of October. After Tsai Ming-Liang's The Hole, he is this time inspired by Gaspard Noé's Into the Void, which I haven't seen - not after what Dominique and some other friends told me.
But now I'll have to...
Johan showed me some sample of what it is going to be. It's still - and always will be, knitting. The wool he's been using is a phosphorescent one.
I already have some ideas. I had been listening to French electro artist SebastiAn's album and got stopped on a track which featured a harpsichord - harpsichord meets Daft Punk.
So I'll move from the airy atmosphere of The Hole to something more earthy and trashy.
Maybe I could use that track for the soundtrack as well. There's a club scene which needs some electro-dance music.
[...]

My life at the moment is quite domestic. Home, gym, music. The heat and the violently changing times compel me to create a little cocoon where I welcome my friends.
It's been a year now that I have been in Taipei.
First cycle.
ChingYao introduced me to a lady, one of those extremely wealthy persons with a prominent position in the city. She's a lawyer and takes singing lessons with him - whenever her tight schedule allows.
She also said she would help me get my papers.
How, I don't know. HuangYi said that once his military service is done, he will appoint me musical director of his company, whatever that position really means. That should be by the end of the year. Till then, I will have to leave the country more than once anyway: next month to Paris, then Vietnam and Japan in October, Japan, again, in November.
I'm so used to lip service that I'd rather not believe in anything. Just believe that everything will be fine eventually.
For now, I have to write the music for this film. I finally got to see it. In the beginning, I wanted to read the screenplay and imagine the music from there. A month afterward, I asked Bryan to play the film.
The only thing I had seen were some captions, which looked promising.
The film itself is... well, a first film. Bryan did as a graduation project. I tried to talk about it to Bryan, but he seems to be unwilling to bring drastic changes in a project he has nurtured for so long. I will keep trying, though. It may be something different than what he first imagined, but what matters is that the film has a life. In its current state, I'm afraid it may be discarded immediately by distributors. One character, Pierre, is well defined. His scenes are convincing, and the actor who portrayed him is good. The others are too thinly sketched so that many scenes leave a blurry feeling. Strangely there is hardly no dialogue. We hear people talk, but there's no interraction. As a result, my musical ideas keep changing in my mind, except when it comes to the scenes involving Pierre.
I hope the music will more characterisation to it.
We shall see. I feel really confused about the project now.
Tomorrow, I shall start playing around with the scenes and see what comes out. 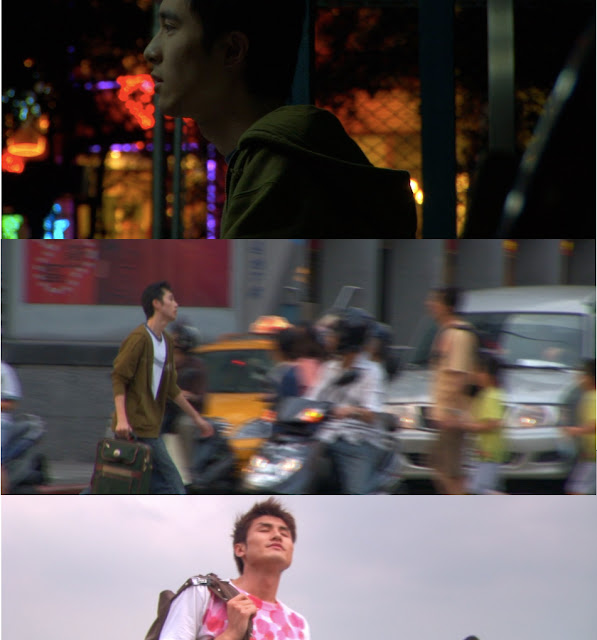