Month of the ghosts

And the Buddhist saga goes on...
One of ChingYao's wealthy student/lady friends invited him and me to a dinner to meet a lama from Darjeeling.
It was held at a vegetarian restaurant - Buddhist lama oblige, on the tenth floor of the Bistro, on ZhongXiao East Road. Quite a fancy place it was.
That woman is a powerful lawyer in Taipei, yet she feels the need to give some meaning to her life. She wants to help artists (a welcomed thought) and gives a lot to this Buddhist community. The lama came with another monk whom I liked instantly. He didn't say much, but there was a true aura of serenity about him. His eyes were kind and gentle.
I found it hard to connect with the lama. He was seated at the center of the table, lit by a spotlight which happened to shine exactly above his head, as if the divine light was constantly on him, while the rest of us were confined to semi-dimness. Divine light or aura of power. If that wasn't set up on purpose, the coincidence was indeed striking.
Beside ChingYao and I, the other guests were mainly female friends of this lady's. For some reason, the lama mostly addressed me during the evening. When he learned I was Vietnamese, he made that his conversation topic for a while. And I heard a highly amusing retelling of Hồ Chí Minh's life, the main point being that he wasn't communist at the start, but was more or less compelled to embrace it in order to bring the Vietnam to independence because of the Americans when his ideas were actually more democratic...
I preferred to remain silent. As he talked, the lama was casting glances at me, as if to see my reaction.
I asked ChingYao to order the food for me, since I had no idea what was good. The main course was a delicious mock mutton dish. But I could have sworn it was actual meat, and not mushroom. My palate was confused.
"It's not sheep. It's not mutton" the lama said.
I smiled at him, then stopped for a second. "Isn't mutton the meat of sheep?" I thought. When I asked around for confirmation, the lama stood his point and saying again that mutton referred to goat meat.
I tried to explain that it was a word taken from French mouton, which designates a sheep, but as used in English, it only applied to the meat of the sheep, as the words beef and veal also refer to the meet of the cow and calf, but come from boeuf and veau, which in French were used for the live animals. But my explanation fell on deaf ears.
"No. It's goat meat!" the lama said again. "In India, mutton is goat meat." I imagined a cross breed of goats and sheeps...
Anyway, I wasn't aware of the idioms they were using in India.
Then I stopped again. The situation was strange. I was arguing, though very politely with a lama????
I decided to stop reacting to his statements.
The ladies were talking in Chinese with each other. I was eating quietly at my end of the table, observing everyone around me. ChingYao had barely said a word during the whole time. Our lady host kept trying to win the lama's attention by asking him childish questions. Whether she was a prominent and powerful lawyer in Taiwan, I had the impression it was a little girl who was sitting next to me.
The lama's disciple was also very silent. But I felt comfortable, just watching him. We would serve tea to each
other, nodding or smiling occasionally. No conversation was necessary.
The lama intrigued me. I had seen other people like him. Guru, self-professed masters, philosophers, spiritual guides... But I didn't want to think of him that way. How dared I having these thoughts? But I couldn't help it. Something just didn't match.
At times, I would catch the lama in deep thoughts, frowning at the ladies before realising I was watching him and returning me a suave smile.
Because of my interest in spirituality and Buddhism, I had been asked to attend meetings and conferences with spiritual guides.
I remember one time, many many years ago, a friend took me to a session with a guru. A very good one, she said. When we arrived, we sat on our little pillow, facing what looked like a throne. When the guru stepped in, candles were lit and everyone joined hands in a prayer position. The man sat on his throne, with two disciples on either side of the chair. He had this mysterious smile which becomes spiritual masters so well...
That day, people were allowed to ask questions. To each question, just a vague response. Always that mysterious smile. Ignorance can look good in a big blur.
I left totally unconvinced. "He's a fake", I told my friend. She stopped attending the sessions eventually.
This lama gave me the same impression. It was only my gut feeling anyway. He talked a lot about Gandhi and Martin Luther King, two men he admires. Sainthood is unshakable when coated with good deeds.
After the dinner, I had a walk with ChingYao. He wasn't in the best of spirit, to put it mildly. Confusing and unsettling, quite a dramatic time for him.
We walked aimlessly. I wanted to take him to a café, but I couldn't remember the exact address, so we decided to go to another one which we liked - and happened to be about to close for the day. IN the meantime, I tried to cheer him up with my nonsensical jokes.
"You really let surprises come up a lot in your life and it doesn't seem to bother you... " he said, as as we were engaged in a some conversation.
"That's how my life is. I never know. So I welcome surprises".
[...]


At home, Chubby (aka my skinny flatmate Olivier) was having dinner with a lovely Polish girl named Barbara. They invited me to join and we chatted gaily until quite late at night. Since it was no time for her to go home by herself, we offered her to used the little guestroom, which she gladly accepted.
Dear An
Thanks for letting me stay at your place.
I will only come back next Monday.
Take care and see you soon.
Andy
Andy said that the reason I hadn't slept well lately, was because of the month of ghosts.
Possibly true.
But when at three in the morning I was fished out of my sleep by some rustling and woke up to see a figure at the end of the room getting ready for bed, I first thought it was Chubby sleepwalking and coming into my room.
"It's Andy!!!" a voice said.
"But... Weren't you coming next Monday?"
"No! ... It's Monday! Sorry"
"Next Monday means 'in one week', not tomorrow!!!"
Andy had entered the guestroom and turned on the light waking up Barbara who screamed. He apologised and immediately turned off the light and closed the door and came to my room.
Yes, surprises all the time!
I shot another series of photos with Andy. He's starting to ease up in front of the camera. Then we sightread music for a couple of hours. Andy wants to record an album of late romantic lieder and art-songs played by the flute instead of the voice so I introduced him to a few of my favourite: Toivo Kuula, Edvard Grieg, Erich Wolfgang Korngold, Jean Sibelius... Songs that are seldom sung. That's what he wanted. The final selection is indeed very interesting and out of the ordinary. 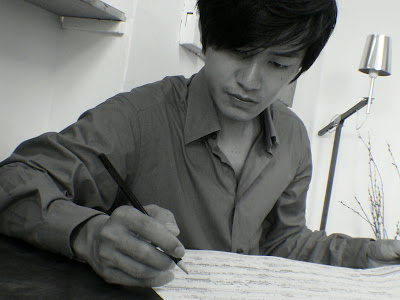 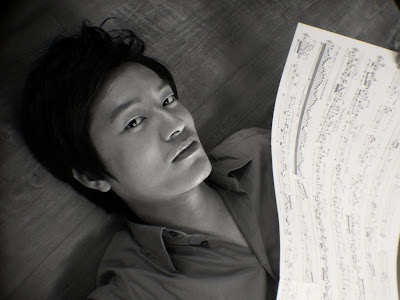 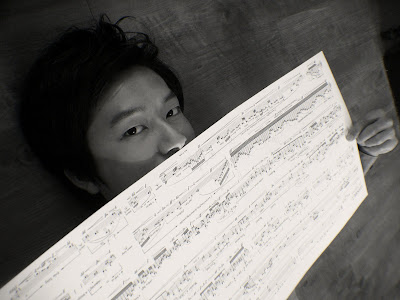 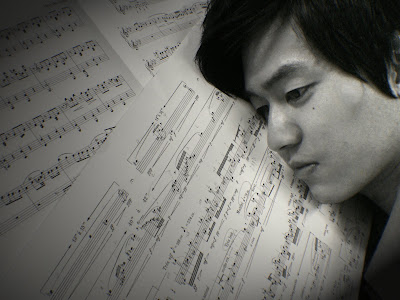 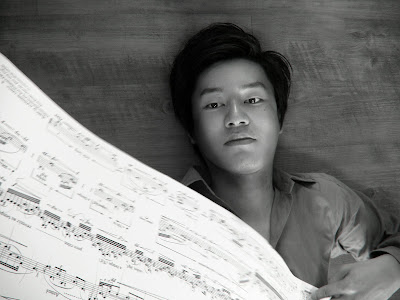 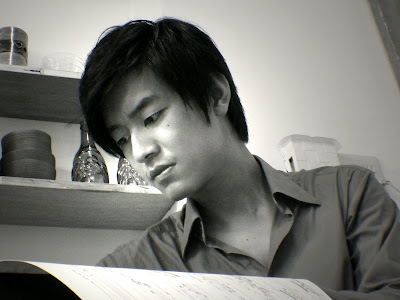 The casting yesterday afternoon was a miscasting. I didn't know I had to speak in Chinese. They did a test with me anyway and took my measurements, since I was there, but I knew it was more out of courtesy. The director needed a break from the previous casting, so her assistant did the test with me.
She gave me a little stuffed monkey. "Show this to the camera, as if it's a gift for somebody you like, like your girlfriend..."
I may fare better doing castings for printed add, I thought as I walked home.
Posted by Aaken at 18:14