As I foresaw it, I only had to look pretty and sit still while the others were talking during the press conference. I merely had to tell how I worked on the music and my words were tentatively translated by Tomoko.
It wasn’t really a press conference, more a private meeting with some journalists. A big long table had been set for them and we sat on four chairs opposite them. Mihara san and I were wearing white, while Jo and Tsuyoshi were in black jackets. Night and day…
Since I didn’t talk, my eyes rested on each the interviewers‘ legs and feet since I couldn’t really stare at them without embarrassing them.
One didn’t do a proper depilation job on her legs, the other showed brown marks where shoes had been too tight for her feet. Then I raised my head and had a look at their faces. Somehow I couldn’t connect the legs and the face.
Behind them, photographers were shooting us as we were laughing, smiling, recalling amusing anecdotes…
The Noism supporters came shortly after we finished the interview. They were allowed to attend the rehearsal and sit quietly in the back seats of the room.
The were first treated with a tech rehearsal of PLAY 2 PLAY, ie. Just lights and spacing. Then we had our first run through complete with light, costume, set design and music.
Now I see what PLAY 2 PLAY is really going to be on stage! Jo really has a talent for lighting design. The Yves Klein blue, nine-bodied costume by Mihara finally made sense and brought a powerful element.
Jo had found a solution for the moment when all the pillars have to be moved to the side and leave the stage completely bare. The first idea was similar to what he did before the finale in NINA: the curtain falls, pitch black in the theatre while the music would play.
But now I saw something I had caught on the backstage screens yesterday: Jo created a twilight-like atmosphere and let the audience see the dancers push the pillars to the right side. With the combination of the music, you really have the feeling to witness the end of an ancient world. Götterdämmerung.
Or the twilight of our world…? 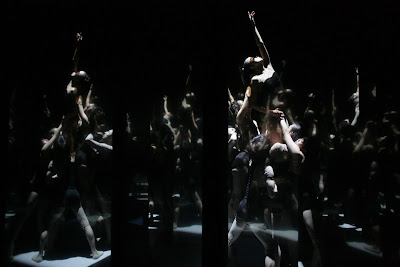 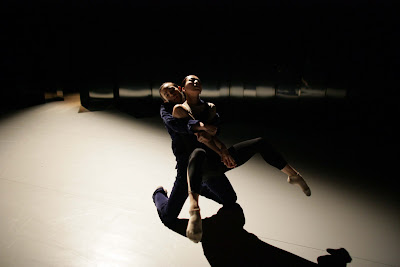