Whenever I meet Bévinda, I can be sure that we'll be writing a song, doing a photo session or planning new projects together.
She's so free and open-minded that there's no topic I would feel embarrassed to discuss with her. We talked about love, about sex, about music, about life... She showed me naked pictures of her new lover, candidly told me about their escapade in Sardegnia. 34 year old. Met him at the terrace of a café where she was having a bad salad.
They found out they were both from Paris. The story began.
"It was the most beautiful birthday present I ever had", she commented.
She mentioned the age difference. "I'm 50 now!!! He doesn't seem to mind..." There was an uncertain expression in her eyes as she said that.
Bévinda is like the big sister I never had.
I told her about the few current projects I had: the two films, the recital at the National Concert Hall, next year for which I have been commissioned two pieces...
I told her about the film Pierre est heureux. I needed lyrics for one of the two songs, To the Sun. French and English lyrics. I had asked Thuy-Nhan to sing and play the guitar on it and she gladly accepted. But before we do the recording, the song needs to be finished! I played the instrumental demo to Bévinda and she immediately started scribbling down on a piece of paper.
"Let's make some music", she said later on. She showed me drafts of lyrics she had written. "This one I wrote yesterday... I think it sucks..." It was about how she loves the horizontal position, whatever that may suggest...
She read it out loud to me. I sat at the piano and started playing a few chords progressions until I found something I liked. Bévinda hummed a melody to match the lyrics. Then she suddenly remembered she had recorded some rough vocals on her phone the previous night, and played it to me. We then improvised further until we had the full song. It's in French. The name: Sans Soucis (Carefree).
I was - not surprisingly, browsing CD's at a store when the phone rang. It was Bévinda. She wanted to read me what she had written for To the Sun... 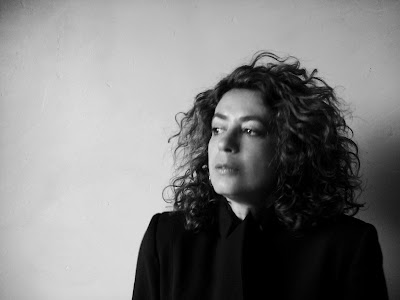 She told me about a project involving her and a string orchestra. for a series of concerts next year. She had asked musicians she had worked with to do arrangements to each pick a song and orchestrate for string.
"Would you do one?"
Of course I accepted. The project came from the former first violin of the Orchestre du Théâtre des Champs-Elysées who now runs a music school in the South of France.
"And please, don't pick Fatum or Asia! I have sung them millions of time, I can't stand them anymore!" she added.

I'm going to listen to those two albums of hers I really love: Terra e ar and Chuva anjos and select a couple of songs. Arranging for a string orchestra? I love the challenge!
Posted by Aaken at 14:43