Contrast.
I have left Lamma Island for Chung Hum Kok, in the Southern part of Hong Kong Island where I’m going to hosted for the rest of my stay, that is, the rest of the first part of my stay.
Lamma Island was a rural, quiet, peaceful and very laid back place which came as welcome release from days spent in the hard speed city. The Chung Hum Kok is equally peaceful. Just add glamour and style to it. And lots of money.
Lots of style and lots of money to achieve it. It can be likened to the Côte d'Azur, French Riviera. Expensive houses on the coast with  a private view on the sea. People dream of it, pay to enjoy it on a holiday. Some people have as simply as one can drink water.
At first, I was overwhelmed by the place. Fred has been so kind to invite me to stay. There’s a Steinway grand piano in the living room. Everything has been decorated and furnished with great taste. Spotless, perfect, immaculate. I felt like a stain!
That’s the kind of place I would love to have myself - and will eventually. Maybe the change of scenery has been to dramatic for me, from Paris to Hong Kong, staying in Lamma Island and now in this AD magazine worthy house.
But then, I certainly earned it, somehow. Things never happen for now reason, and if I felt the impulse to move back to Lamma Island, I now am happy to enjoy it, little by little. To get used to the idea that it is part of my life, and that I am not a guest on a film set. 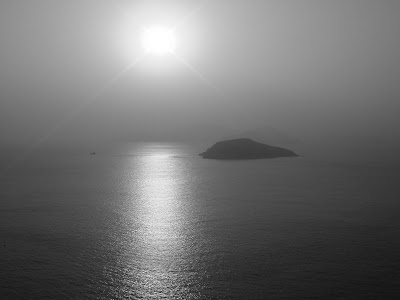 […]
I have met Ah Sing, who’s a screenwriter, children book writer, and also has a well paying job to finance his project: to have a publishing company. He’s worked as s screenwriter for the Shaw Brothers and more recently collaborated in the musical drama ‘Perhaps, Love’, with Takeshi Kaneshiro.
We had only been exchanging a few messages on the internet, but since I was new in Hong Kong, he kindly offered to visit me on the island. We had a walk through the hills, sat by the beach,  had some tofu desert in an isolated stall on the road and talked, of course. The received ideas will have it that Hong Kong people are mainly materialistic, yet I have met a few people who try to cope with this life in order to reach their aim. Ah Sing has already been working in the cinema business and will not give up writing just because it doesn’t make money. I don’t know how he manages all these jobs, but I was highly inspired to see how much he gave for that.
I don’t know where this encounter will lead to. He wants to help, knows some contacts… I explained to him my position regarding this ‘business’: never forget that even if most of the people follow the established rules, there’s always a way to expand and bring new elements in the game.
Posted by Aaken at 01:57