There are some wonders in the world, people I look up to who send out warm rays of inspiration and hope. Henri Dutilleux is one of them. At the age of 95, he's as creative and dynamic an artist as he was fifty years ago. He still goes to concerts and events, has this lust for life that will keep him going for some more time. "Crazy about life as a child is" as he would like to say.
Of Henri Dutilleux, I only have a few distinct memories. I had never met him. My only link was this card he wrote to my parents when I was born.  My father told me a lot about this gentle man who would always support him by attending concerts and premieres or by giving him words of advice. He would never fail to send us a card every Christmas: an embossed golden Christmas tree on  a monochrome background . We would immediately recognize his angular yet elegant handwriting. It may have been the same card, save for the colour of the background which would change from one year to another, but we enjoyed the comforting familiarity it gave us.
I accompanied my father to the first screening of Ainsi la Nuit, a film focusing on Dutilleux's famous string quartet bearing the same name. The film itself was done like a TV documentary. Unfortunately, the director wasn't very inspired visually. The photography was dull and the colours fairly unattractive. However all was forgotten as soon as the music would be played. the performers, the Rosamonde Quartet are some of the best chamber players in France. Their interpretation was flawless. I just wonder who, beside the contemporary music afficionados would find any interest in this film.
"I know why this film has been rejected by tv channels", my father later told me. "It's because it's much too technical. Whoever doesn't have the knowledge of music vocabulary or isn't an admirer of Dutilleux's work will find himself completely lost."
As the master of ceremonry joked, regardless of the intrisec qualities of this film, if it was ever to be showed on tv, it would sadly be at three in the morning when everyone is asleep!
Quite expectedly, the Parisian circle of musique française was there, composers, famous or not, musicians, agents, relatives of Dutilleux, as well as a whole parterre of moths who would never miss a chance to rub shoulders with the 'chosen ones'.
Dutilleux was very moved by the events. He gave us a heartfelt speech from his wheelchair, his voiced charged with emotion, and even found the strength to stand up to bow to the audience.
"As you may all know, times for me are difficult now, because of my health so I welcome such moments of joy and happiness. Words will not be strong enough to express the joy I feel in my heart."
I looked at my father and saw that he was also very moved. How dearly he loved his master! 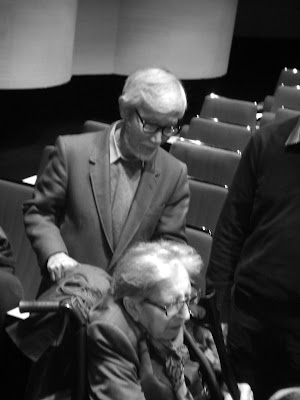 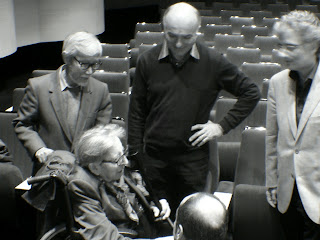