"It's working great. It's too good. It's perfect, perfect, perfect." The Beta tape of Thief will be sent to the TV station on Monday and then we can both sigh of relief - and have a nice dinner. Jay has just come back from the Dubai film festival, exhausted but obviously without any prize - he didn't mention anything about that in our message exchanges so I assumed.
No erhu for the final version. I'm quite disappointed. I was asked to record solo piano versions of the two songs. I came to believe that it would make more sense to have By Nightfall - the opening song, played in its entirety at the end. But Jay insisted in keeping Un Espace vert. "It's working great!" he said. Whatever works as Woody Allen would say.

I nearly finished the music for Pierre est heureux. Bryan is sick at the moment so we will only resume work next week. A couple of more scenes to score and everything will be completed. At last. The year is ending and I'm finishing all my projects.


A sigh of relief, this time for ChihWei who gave his concert yesterday in Taipei at the National Concert Hall. He and Chun-Chieh, the pianist had been rehearsing intensively the past week, trying to get the best of the little they had, and remaining focused in spite of inner gut battle between the organisers, family and teachers...
The programmed was oddly composed. What was originally supposed to be a concert with a spotlight on ChihWei became a double star billing once young prodigy Chun-Chieh entered the picture. The pianist being more famous than ChihWei, matters couldn't be done simply. Since he had to share the light with his musical partner and he decided to put show off piano pieces in the program. (show off they maybe, albeit usually played as encores...) In the end the program didn't make sense. No direction. The first sonata (César Franck's) was underplayed, due to pressure, lack of rehearsing time... The piano pieces made the whole concert sound like a musical mish-mash. Fortunately, the whole evening was saved by the Richard Strauss's sonata. It wasn't perfect. Precisely because the two musicians were not so confident about the piece, they had to pay more attention to each other, thus creating a true, lively partnership, something which was missing during the rest of the concert. I wish they had one more week on their hands. ChunChieh's technique is phenomenal (the fact that he learned that monumental Strauss sonata in less than a week is telling), his touch pearly. Contrary to what he liked to believe, these qualities were in better display when he was playing with ChihWei. His choice of show off pieces was to say the least, bizarre made me think of those women who get obsessed on a particular part of the body they do not feel confident about, and desperately try to enhance, forgetting in the process that it's only a detail that maybe others wouldn't even pay attention to.
Strangely, the ticket ChihWei gave me just disappeared from my desk. It was still there yesterday but nowhere to be seen when I was about to leave the house.
Bizarre, vous avez dit bizarre? 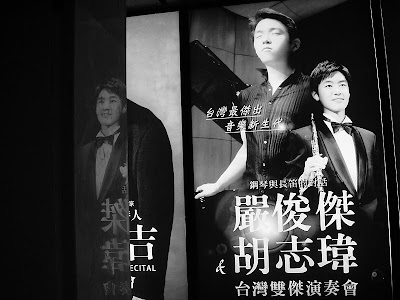 The concert allowed me to see KunLin again. We had not talked since last summer when I gave him all the documents he needed to make the proposal for next year's concert with Avi Avital.
The project was to have a concert focused on Avi and the Taiwanese traditional music ensemble Chai Found, themed on the Silk Road. I was to compose two pieces and make an arrangement of Béla Bartók' Romanian Dances. It was my first commission to compose pure music. The event was to be held at the National Concert Hall next year in September. Until KunLin found out that Avi was having two concerts in Taipei this coming February. When he confronted Avi, the latter pretended (?) that he thought the concert was organised by KunLin. Maybe he should have been smarter when he elaborated this excuse. KunLin felt betrayed and now is about to cancel the project. Unless... unless he finds another mandolinist - he knows a more famous one than Avi Avital. Or unless the musician plays another instrument. I had told KunLin that even if the project failed through, I would still compose the piece, this time for cello instead of mandolin. Writing for mandolin was a challenge I was willing to take, but writing for cello will be a great joy. This left him with some new thoughts about what to do.
We shall see what happens. KunLin will organise a meeting with the members of the Chai Found ensemble, FangYi, the other composer who was commissioned to compose for Avi.
And there's another project he mentioned, a series of events for the 800th anniversary of the construction of Notre Dame. Dance? Music? Theatre? Cinema? Apparently, it's an open field. He asked me to come up with an idea. The events will be held at the HuaShan Culture Park.
Posted by Aaken at 19:34