In the dream, Billy showed me a chart with names. On mine was a big yellow circle with a sign on it. He looked at me and said that he regretted that it had to be this way, that we could not be together because I was given that score.
The news didn‘t surprise me but my heart was shattered nevertheless. I leaned against the wall and gathered all my strength to suppress a flow of tears.
Around me, people were still tending to their business. A couple of women passed by and looked at me. I looked back at them. Their expression wasn’t right.
« Stop!!! » I yelled.
Everybody stopped and looked at me.
« We have to do it again! The way you are walking and looking at me, you look like an actor trying too hard to act. Let’s do it again! »
The crowd scene was repeated. I thought of Synecdoche New York, this film by Charlie Kaufman where the main character recreates his life in a giant studio until the boundaries between reality and fiction are erased.
That’s the feeling I have more and more about my life. I watch myself as I live my life. I know it’s all a game. Nothing matters, really. But as I play that game, I try to give all of myself in it. Feeling joy and pain becomes an experience that needs to be repeated  in order to keep on playing.
Taipei again. Bangkok now seems like a happy mirage.
Sick like a dog today. Must be the fried rice I bought from the food stall down the street. Must be that I pushed my body a little too hard the past time. Going to the gym everyday, not eating enough, the heat in Bangkok, the sleepless nights… My body is sending me a warning!
Meeting with the journalists from Muzik and China Times at the National Concert Hall tomorrow for lunch. I hope I will be in shape. I actually thought it was scheduled on the day of my departure for Bangkok. I showed up at the given place and found that a Tom Ford event was to start instead.
Liang-Yen, whom I haven’t seen since last year when we worked on Auntie came to meet me nevertheless and took me to some local restaurant and kindly offered to drive me to the airport!
He also told me about the Auntie follow up in Beijing.
A company showed interest in re-staging the play in Beijing. Because of censorship problems, they had to rewrite the whole libretto - which wasn’t a bad idea. The music was kept intact. So from the story about this mother who has two gay sons and married a husband who left her and turned out to be transvestite cabaret performer, the plot became the story of a middle-aged married woman who has an affair with a young lad from the countryside who wants to be a stage artist… Of course it had to be an ill-fated love story, otherwise the audience would be bored to death. Soap opera goes musicals…
Lian-Yen jokingly said that he paid all his due with this project. Like me, he received no fee for his work at all and had to come up with three versions of the play so it could be performed regardless the budget offered by the venues.
I haven’t seen a single scene from the original version of Auntie, much less anything from this new version. Maybe it’s better that way. So Liang-Yen and I can remain on friendly terms! 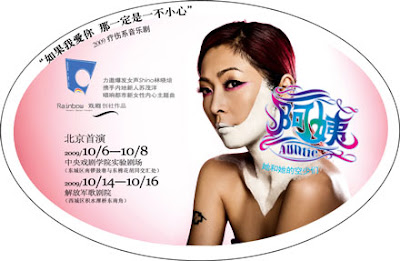