Where is your head?

And so it ends again. I will leave Tokyo for Taipei. My wandering goes on. Each time I find it hard to leave because a part of me starts to bond with the place and the people, a longing for a sense of home, probably. So each departure is tinted with a touch of sadness. I don’t know what’s in store for me in Taipei. I can only wish for the best.
These three weeks in Japan were great. Hoffmann brought me immense satisfaction, I had blissful days with Satoshi, and Tokyo never fails to excite me, in spite of the extreme heat we had to endure! Am I lucky? I guess so. The only thing I have to work on is to rid my mind of any remains of negative thinking. I’m getting better at it. As a consequence, very positive things materialize in my life.
I met Yuta-san yesterday with Nolico. Yuta designed the program and the poster for Hoffmann. Jo showed me what he did for other projects and I really liked what I saw. When we met during the premiere of Hoffmann, it was instant chemistry, even if he can’t speak English. But you know when someone is going to be a good friend, and Yuta is one of those people.
Jo refers to him as Master Yoda. He’s so knowledgeable and smart, sharp and generous with a childlike spirit. The range of possibilities he shows from one project to another is amazing. If Jo admires him, I don’t find it surprising to share the same feeling.
Before I could ask him myself, Yuta said he wanted to work with me and do the cover of any project of mine. I had in mind to ask him to design my album cover. I didn’t know how to bring up the topic, but his friendliness ironed out any hesitation I may have had. To my delight, he said he had toyed with the idea as soon as the day of the Hoffmann premiere. He discussed it with his partner and they both agreed they had to do something with me. As Nolico pointed out, that’s how my life seems to unfold. So I gave Yuta the USB key pack we did for the concert and told him to get back to me as soon as he has listened to the album.
(These USB keys look nice, but I found out that the quality was below average. Many of them just melted in my bag in this Asian heat! Considering the price we paid for each of them, I would have expected something more resistant. )
[…]
Another favourite - typical An moment: I had said farewell to everyone, I had waved goodbye to Tokyo, saying I would be coming back soon, I was doing my check in at the airport when the lady behind the counter asked me whether I really wanted to change the reservation.
“Change? Why change? No, I’m leaving today.” I replied.
“So you’re changing your reservation for the 8th?”
“Why the 8th? No, I’m leaving today and coming back on the 8th”.
“So you want to change the reservation?”
The conversation seemed to be stuck on a loop as we were growing more and more peculiar as it progressed.
It finally appeared that I made the wrong reservation. My flight was only a week later!
I suppose it doesn’t happy for no reason – the positive one being that I still had things to do in Tokyo, the negative one being that I may actually feel so reluctant to really being this life in Taipei that I unconsciously do whatever I can to postpone the moment. 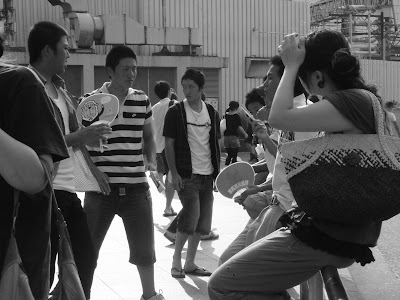 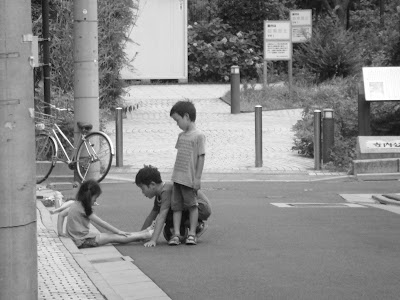 […]
I received some news from Huang-yi who said that he had requested a pop singer from Taiwan to join his Symphony Project, the point being that she can’t play the violin at all. I wonder why he wants her to be in there. Nolico jokingly said that maybe the audience will have to choose between a violin played by a robot, or a violin played by someone who doesn’t know how. Huang-yi’s answer was that he wanted to bring people from very opposite fields who wouldn’t otherwise collaborate together. The pop singer is apparently quite famous and also quite nervous about the project.
I’m getting more and more puzzled as this project develops…
Posted by Aaken at 11:36