The master at the temple in Hong Kong told me that things would only start to unfold for me around summer, but before that, it would be lots of hard work. And this is precisely what is happening.
The score for Auntie is nearly finished! I still have a few interludes to patch the whole thing together.  The songs are all done, the last three ones were penned yesterday, at one in the morning, while I was taking the MRT back home. I was half dozing when I suddenly woke up as a new song was playing on my i-Pod. I could as well say that someone patted my shoulders and whispered something in my ears, for I immediately grabbed a blank music sheet and hastily scribbled down the notes.
I was at the studio the same afternoon with Jasmine, to see about her vocal range before writing her song. We had lots of fun, especially when I made her try her lines for the Buddha goes to Bollywood number. If there are any religious fanatics in Taiwan, I may be their next target, unless they have a very good sense of humour. As the character of Auntie is a transvestite performer the music she sings intermingles disparate elements  a sort of mish-mash of everything, like going to a big oriental bazaar. So for her number about Buddha, I don’t really think that the accurate treatment should be a solemn chanting, complete with bells.
I also decided that I will not end the play with a big up-tempo finale, and stick to the original idea I had: the mother is alone; she has killed her husband; her two sons have shattered her dream of having a grandchild and deserted her, the father - or is a figment of her mad imagination, gives birth to a baby; she lulls the baby to sleep and has completely lost her mind, in the background someone climbs up the stairs is about to start singing, another Auntie? The strings play mother’s Hope Theme one last time. Curtains. The end. It will not be the most uplifting ending and I hesitated for a long time. But that’s where the play goes naturally. And it’s no wonder that  something in me resisted and prevented me from starting to compose the dance finale. That may an idea for my future concert!
[…]
I may not be able to attend the premiere of Auntie, but there seems to be nice compensations coming along. I’ve had an interview the other day for PAR magazine, Taiwan’s sole performing art monthly. The photographer came yesterday to make a few shots as I was working with Jasmine. The studio room is quite small, but one of the pictures he showed me made me look like I was playing in a concert hall… The paper shall be published next month. 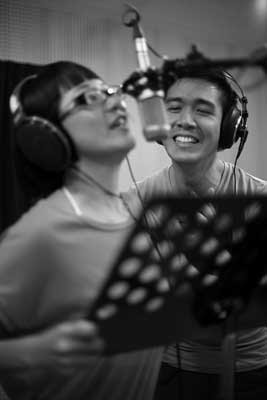 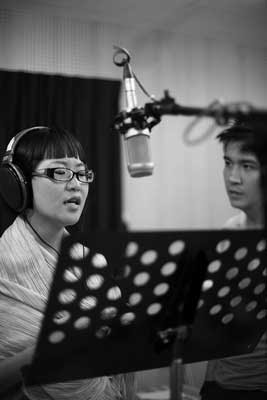 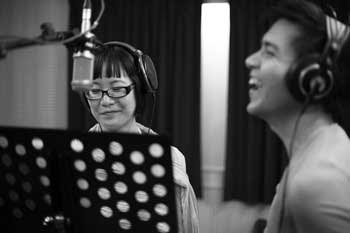 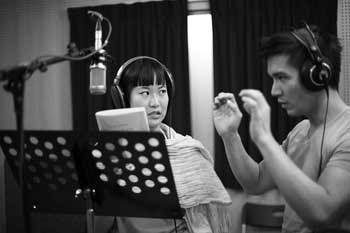 The company has been nominated in three categories for their last play, Ciao Ci Chao, at the Golden Melody Awards so Pan Lili will be singing her songs from Auntie and I will be introduced as the composer. I thought at first it was some minor awards, until a friend told me it was actually the Taiwanese equivalent of the Grammy. Whatever that is, it will be a nice opportunity to get out and meet people. A press conference will also take place three days afterwards and we’re supposed to perform 30 minutes of the show. I will be happy to step on the stage again and play music. I miss that so much.
Posted by Aaken at 23:10