The Japanese have certainly brought the concept of cute to its extreme.
When something is cute, it’s totally impossible to say something about it. As if the mind has been numbed with some drug and is incapable of any fair judgement. I cannot help but be completely fascinated by this cute phenomenon, even if, once sober, I wouldn’t even think of liking it.
I enjoy to bask in Cuteland!
I found myself at HMV yesterday and saw a whole gathering of young crowd. They were waiting in line to meet and shake hand with a new young artist, Hayashi Naojiro, who was launching his debut single Hikari. There I saw a perfect embodiment of cute. Handsomely cute with the cutest smile to have everyone drop on the floor at his sight. There was a joy to say that word to describe him. Because the song they were playing on repeat wasn’t particularly striking. A well... cute melody with a none too risky ut pleasant arrangement. I was however surprised by the warmth of his baritone voice. I wonder what kind of future he’s going to have in this music business jungle. 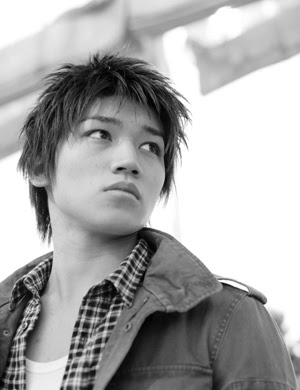 I’m now working on this music installation that I proposed to do for the theatre. Jo was enthusiastic about it. I’m going to use this poem, Der Abschied, which is taken from Gustav Mahler’s song cycle, Das Lied von der Erde. It was apparently two old Chinese poems in their German translation combined into one. Mahler subsequently made a few alterations and added the final line. Ewig… ewig (eternally… eternaly…)
This word I used as the sole word for the finale sung by Isabelle. This finale is really the crowning of the whole journey that is PLAY 2 PLAY.
If I didn’t manage one more time to write happy music, I at least could gear my music to end on a hopeful, if not positive note. I would say serene.
This music is really mirroring what I have been through the past year. A year of letting go, facing my old demons, leaving what wasn’t mine to carry, cutting unnecessary bonds… Those struggles and resolutions find their way in the music. Now I wonder what is going to happen. I see the world of possibilities in front of me. It’s impressive and frightening. But it’s my life and I’m so proud to live it.
The installation is conceived as an introduction to the ballet. I didn’t want people to arrive at the theatre and follow their habitual routine.
I created three spaces: Ewig, Der Abschied, and M/F. The first two are based on the poem, when the third one is a dry description of what the dancers are doing on stage, backed by a minimalist rhythm track.
The theatre offers plenty of room and space for the installation. I also would like to make a video of Sawako simply staring at the camera. Like a live portrait. Yes, I got that idea from the Bob Wilson exhibition I saw in New York. The difference is that I want those images to be projected randomly on the ground, and on one of the white walls of the theatre. As if somewhere the show had already taken place before the audience actually sees it.
Posted by Aaken at 22:08