I had sent Christophe the music sheet of the new part I wanted him to record for me. Thanks to the magic of internet, all that is made possible.
The sheet was scanned to be used in the program as well. The photographer had only made headshots of me and my two pages in the program were more a display of me as a pretty boy in the theatre than a stage music composer.
So I picked the only decent picture of me and Jo talking to each other and suggested to use the music sheets instead. Anyway, Mihara-san was asked to draw a sketch of his costume, so the idea was coherent. The result, now, is satisfactory. I managed to have pictures of Isabelle and Christophe included on my page as well.
So the new cello parts arrived yesterday night. I quickly added them in the music and, by my troth, how right I was!
Now this third movement  is well balanced. I no longer have this sensation of a desert with all these bits of cello phrases. This exercise was a little draft for a future cello piece I want to write.
When I arrived at the theatre, Jo told me had found the old man to read the text, 'Der Abschied’ that he now wants to include for the Slowly we waltz movement.
I wasn’t particularly keen on the idea. I thought the effect would be too self indulgent and sentimental, especially since the cello already brings quite an emotional charge.
Yuta tried all possible ways to read it. But Jo came to the conclusion that he was too young to express its depth. The text required a person of some maturityin life. So why not pick someone on the street?
We did some recording with this charming old man. He was an ordinary elderly likeable monsieur  who had always lived in Niigata and who was very excited to be part of the creative process.
Apparently, Jo was not totally satisfied with the outcome. The man surely brought out his personal experience in the delivery of the poem - his sister had died two days ago…
Yet he didn’t quite catch the universal beauty of it.
Surprising? Not really. This inclusion of spoken words has to be really well polished to create the right effect.
I understand what Jo wanted, but I wonder whether ten days were sufficient to do achieve what he had in mind…
Nine more days!!!!!
The sakuras are in full bloom today. Paradise for two weeks. Everyone was out taking pictures. I couldn’t make one step without stopping to admire them… and take pictures! 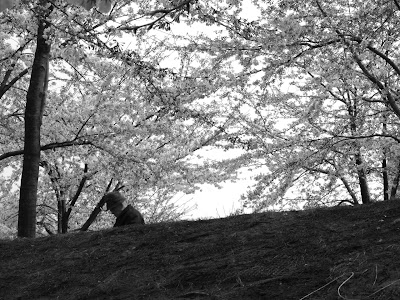