I will be working with Huang Yi on three occasions this year. The first of them is Floating Domain, a reworking of a dance piece he did for CloudGate 2 a few years ago, eventhough one can actually only see the first ten minutes of the original version, the rest being totally new. I had attended one run-through at the end of the last year. As usual with Huang Yi, I didn't know what to expect. But what I saw left me slightly indifferent: dancers trying to act (not so well, as they're dancers...), dance theatre, soundscaping, musique concrète...  Nothing that really got me excited. Huang Yi asked me what my impression was. I cracked a few jokes and told him in all honesty that I didn't like the acting which made the piece look like some high school year-end production. Too much drama coming out of nowhere... I added that I nearly had a heart attack when that techno track suddenly blasted out of the speakers. Techno? Huang Yi? Was he alright? The remarks made him laugh. He agreed that the acting needed some honing and begged me to be patient. "It's still in progress and the dancers are still not comfortable with acting."
Some scenes did catch my eyes, though. But what on earth would I be able to create for that? Beside the techno track, two pieces by Bach played by Glenn Gould were used. What was I to do in the middle of all this?

New Year, January, Chinese New Year then February passed by. Huang Yi was supposed to come to my place but he was kept busy structuring the piece in the limited time he had with the dancers. I had been occupied by the photo exhibitions in Hsinchu and Taichung. Only by the end of February did we communicate again. Huang Yi and I finally met on evening to discuss the music. The only thing I had done so far was a techno number to replace the one he had been using until now.
"I had no idea what to pick, so I went on iTune and bought the most popular one..." he said apologetically. He needed me to compose something very quickly so he could start posting trailers for Floating Domain on the web. I followed my instinct and concocted the requested two-minute long track. The inspiration was the dark and moody techno of Gesaffelstein, whose album I had recently acquired on my last trip to Paris. Yi loved it, which again surprised me. His enthusiasm always comes from the most unexpected angle.

I didn't attend that many rehearsals. The choreography was less connected to the music than a danced situation.
I sketched some ideas which I later played to Huang Yi. If he couldn't exactly tell what he wanted, he knew what he didn't. I soon realised that the best way to work with him was to play the music to him directly from the editing software, so that he can tell me what he did or did not want and I would edit the music in front of him. It turned out to be the perfect way for the two of us. I discovered that being the minimalist that he is, just 20 percents of the elements used in my music were sufficient for Yi.
"Each time you give so much choice. It's like luxury for me. More than I can actually take." he told me.
After four years of working together, we finally know how to connect to each other creatively.
"When I saw NINA at the National Theatre", Huang told me after I played him the full-length version of the techno track, "I was dumbfounded that a composer could so effortlessly blend so many opposite musical styles. I said, wow, this guy can do anything!"
That was the first time Yi would talk so candidly to me. He said in an interview that he needed time to observe someone before if the person can go on the creative journey with him.

April... The last rehearsals these showed me how Floating Domain was going to look like. I was particularly moved by the puppet scenes with the little boy. There is no puppet. The dancer are just holding the clothes the little boy should be wearing: trousers, a jacket and a baseball cap. Yi always wears a baseball cap... The scene is touching. The boy plays with his father. You can feel the tenderness between them. In another a scene, a different boy is terrified by the heavy bangings on the wall of an alcoholic neighbour...
Yi reveals more and more of his inner self in each new piece.
On a technical level, the music needs some fine-tuning. 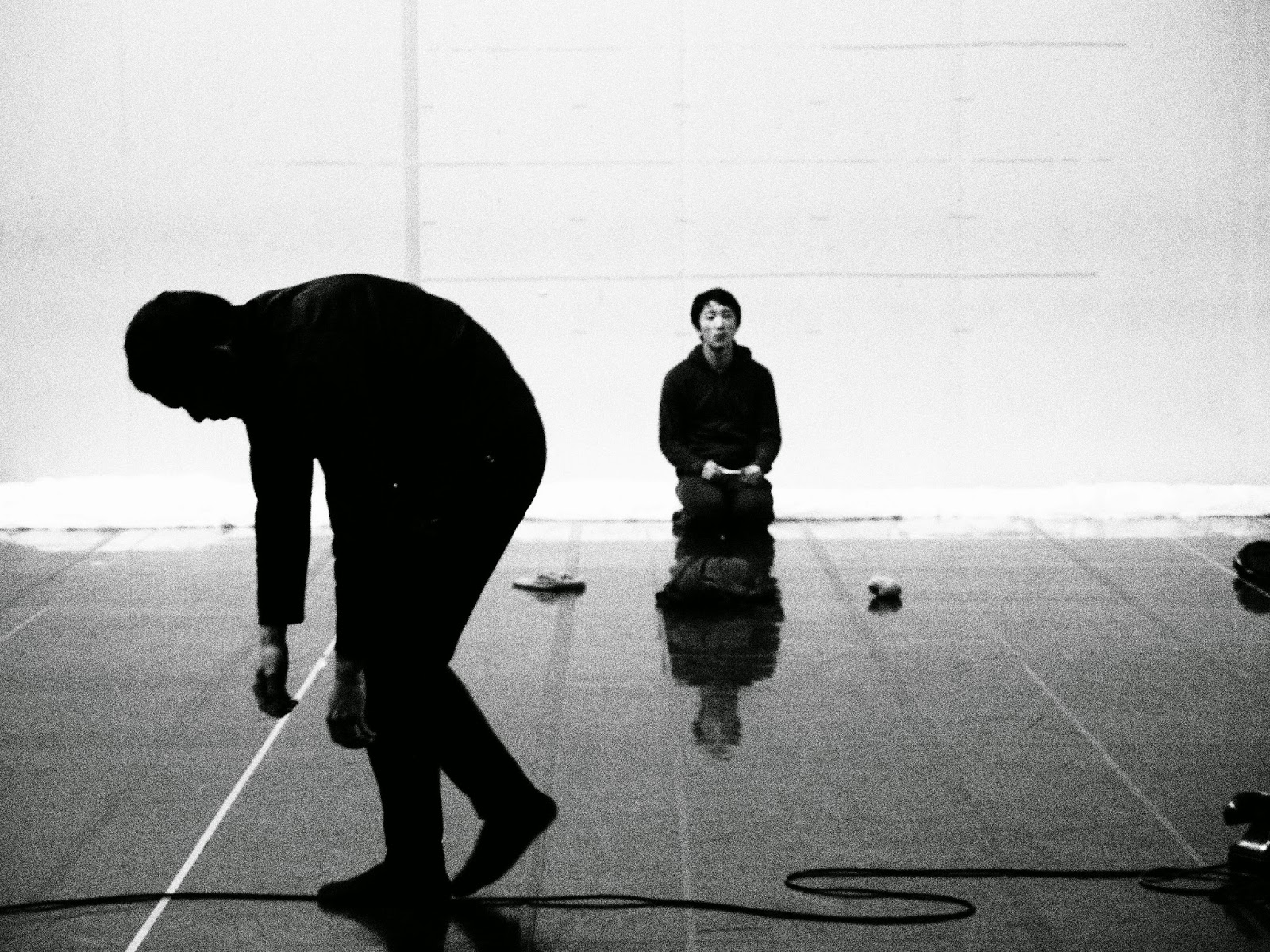 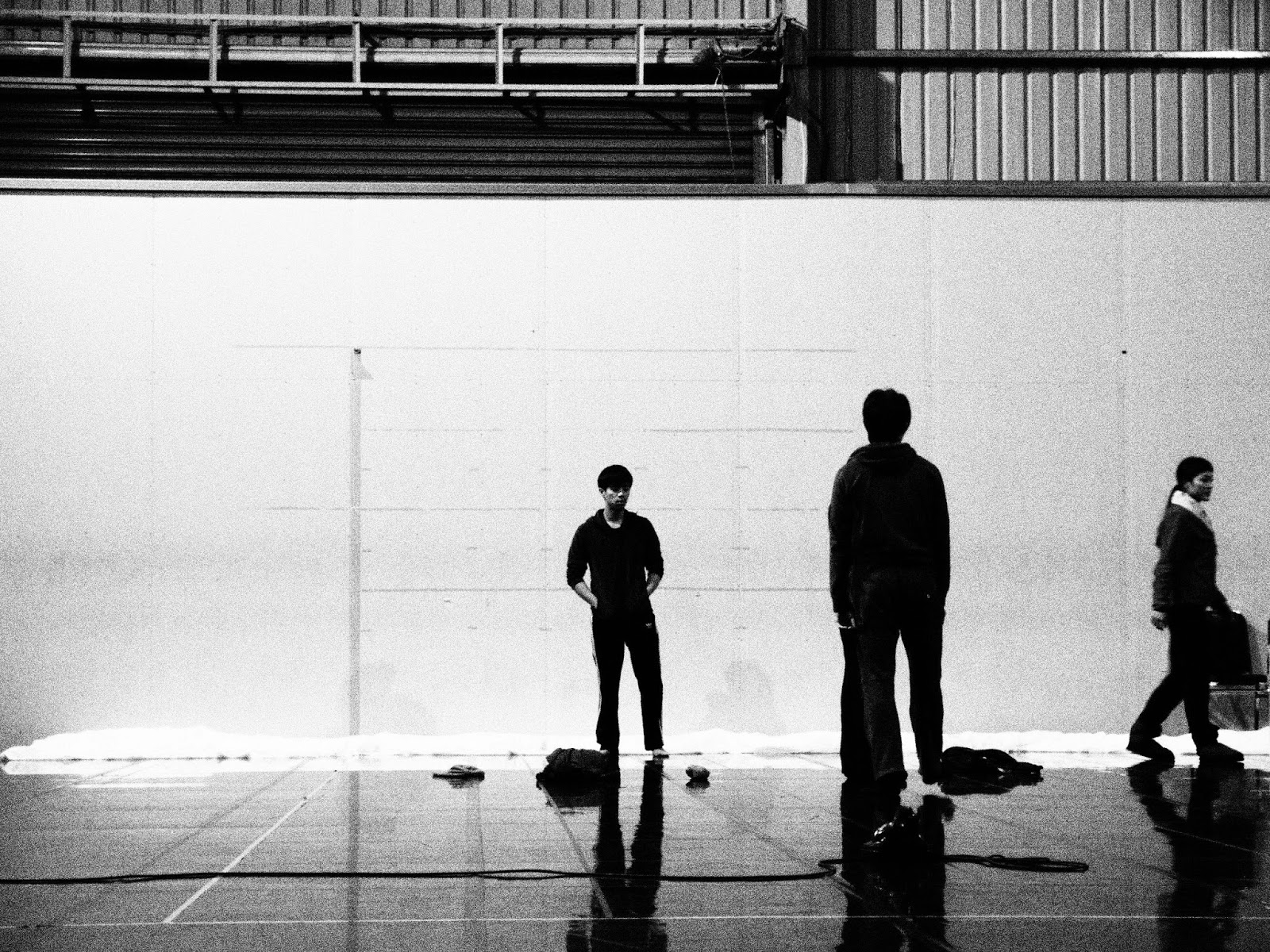 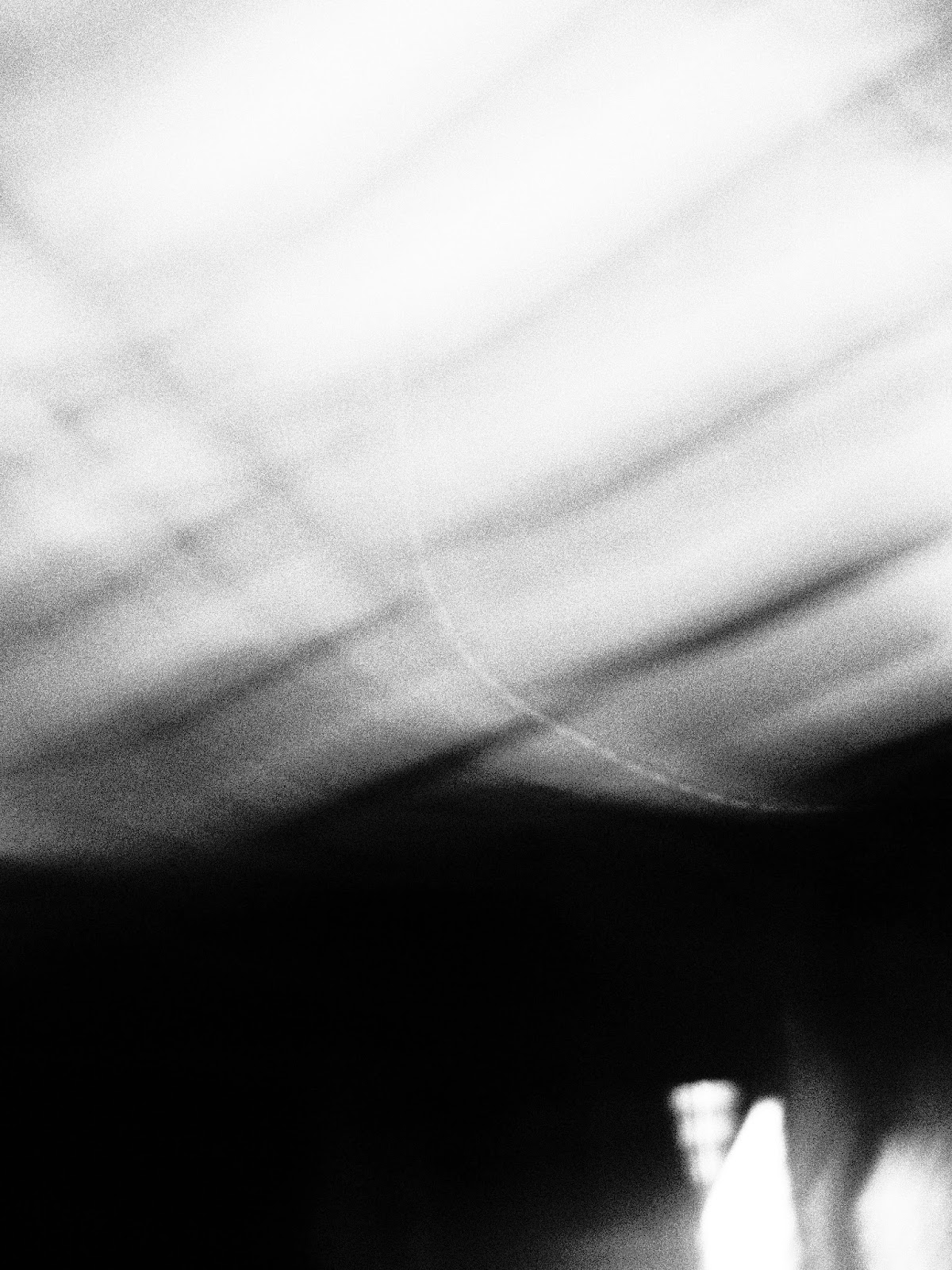 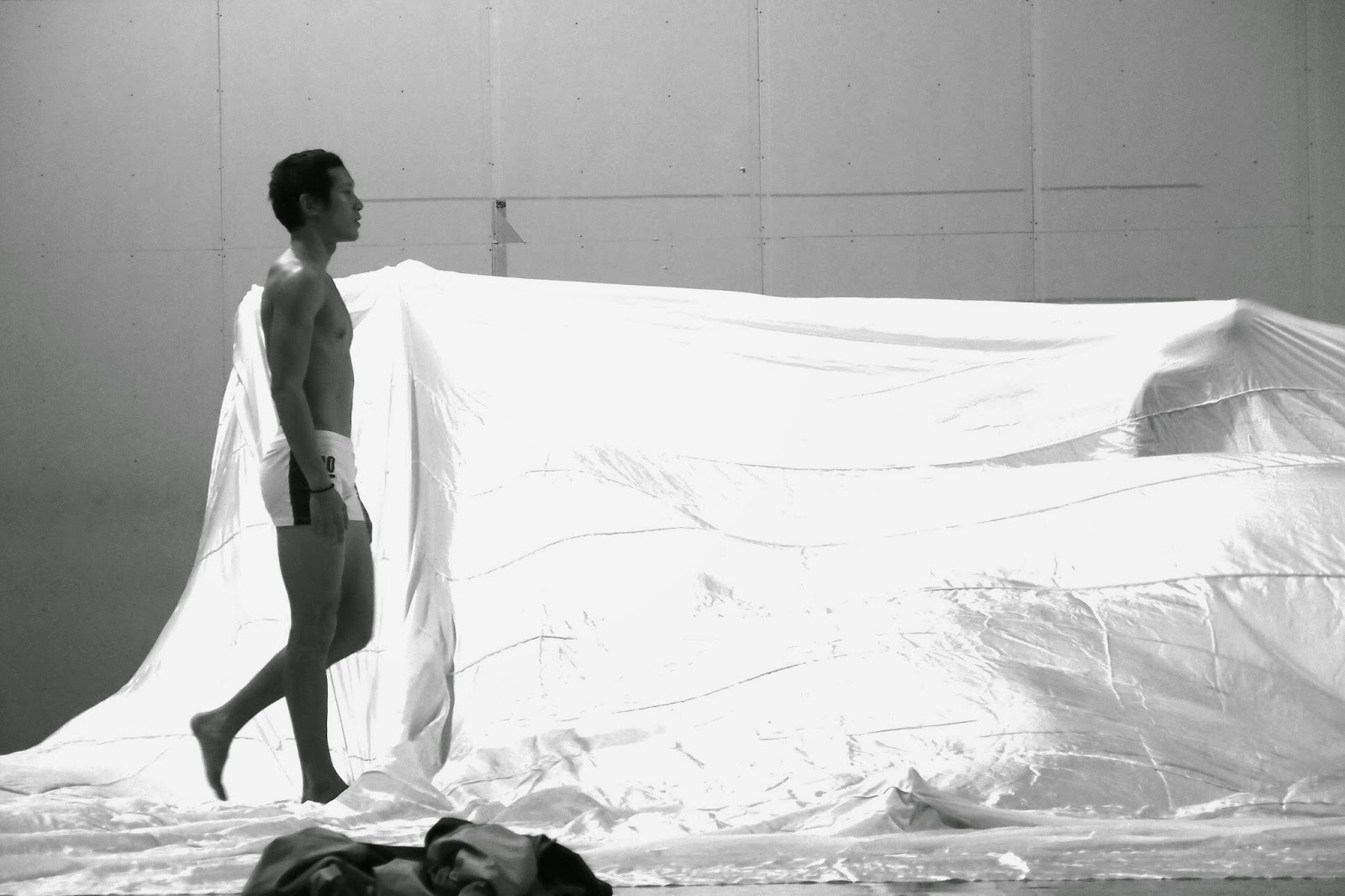 Totally finished the music on April 13th after a full night re-editing and restructuring Space. I should call it soundscape rather than music, since it's there to indicate a mood and signal the change of scenes. The piece ends with a tableau Huang Yi named Fireflies. After the long emotional journey that the piece was, the girl is sitting on the floor in complete darkness. Behind her, all the dancers are holding small lights which are slowly flying up and down. Little stars or fireflies. Yi thought such a peaceful moment was needed after the highly charged emotional drama of the work.
I sent the music to Yi in the wee hours of the morning. His reply was immediate - does he ever sleep? It was now perfect for him. He loved it and through the few words he sent me, I could feel his enthusiasm.
Mission accomplished! 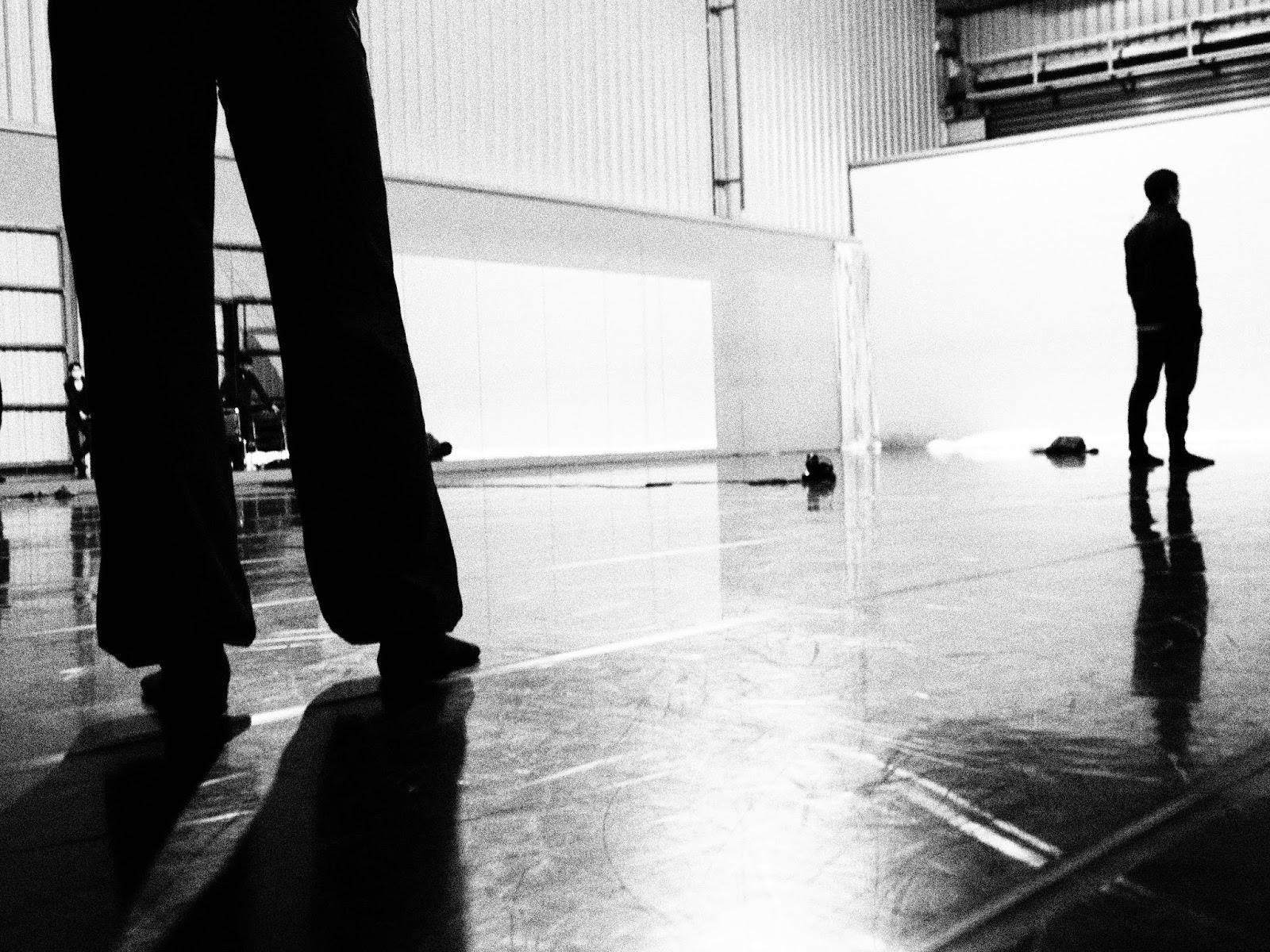