We need to talk about...

Thief has been selected for the Golden Horse Festival this year as 'best short film'. Jay told me that it would be nice if I managed to complete all the music before the end of this month, which I will do. One month is more than enough to compose the few tracks necessary for the film.
I'm also busy finishing the songs for Pierre est heureux. I will have one session tomorrow with Thuy-Nhan and  we'll record the guitar parts. Bévinda has given me the lyrics before I went to Switzerland so now I have to come up with the melody that Thuy-Nhan will be singing. In a couple of days...
My father has been complaining that the past summer had been so disruptive that he felt completely blocked and unable to reach this state of calm and quiet he needs in order to compose. First was the presence of my L.A. cousin Laura, who, was supposed to stay a couple of days and ended up staying for weeks, then the death of his brother in a car accident and the sale of our beloved house in Bretagne.
I heard him try a few chords on the piano the past mornings, I hope that he's back to his creative self. He joked with my mother and his spirits seemed high. He was smiling. I think it's a good sign...

I spent some time with Dennis yesterday and we saw We need to talk about Kevin. The film stayed in my mind for a long time. That threw me back to the time I was 12. I was going through a miserable year at school. My music teacher who had sensed lots of potential for music in me had advised my parents to send me to a school which provided a special section for musicians. Students would be able to attend the music conservatory as well as the regular school and have their schedule arranged so they could follow their academics and have enough time to practice their instrument. That actually meant extremely long days. I was first very excited about the idea. Being in a class where all the students would be as passionate about music as I was!  How exciting! I imagined everyone having long discussions about such and such composer, making music together, discovering new music together...
"What the fuck are you doing here?"
That's how one classmate greeted me on my first day. I was a bit lost in this new environment. All the children I saw looked too normal to me. I was trying to figure which one were the musicians.
Later that day, during our first music class, I started questioning a boy sitting next to me about his musical taste. We may have to spend lots of time at the conservatory, but we still had music classes at school. To each composer name I mentioned, he would  answer with a  puzzled look.
"Do you know Léo Delibes?"
"..."
"Do you know Heinrich Marschner?"
"... ???"
"Do you know..."
I had the slight inkling that I could have picked more famous composers... I closed my eyes. No! It was impossible! A simple nod from him would have meant that I had been sent to the right place, that something meaningful would be coming. Nothing. The only outcome of that little conversation was that I had branded myself with the label 'weirdo'. If my parents had sent me to work in the mines, it would have made no difference. I felt betrayed.
It went downhill from there. Music and literature classes were my only precious  - and too rare, moments of bliss. The rest of the time was pure hell. I was bullied, called names, publicly humiliated on a daily basis.  Sport classes were torture sessions to me. Teachers pretended not to notice anything; my parents were totally oblivious of what was happening to me beyond the border of the family, friends would just vanish when I was in trouble. The few ones I felt close to couldn't do much to help. I was particularly hurt when Sebastien, a happy and talkative boy who was my 'best' friend when we were alone would side with my bullies once we would be outside. "Fool! Traitor" I would think of him. He reminded of me of the weak and double timing  characters in gangster films which were played by Peter Lorre to the perfection. I retreated further and further within myself.

Then one Tuesday evening I caught  the trailor of The Village of Damned on television.: George Sanders against 12 blond children with angelic faces but frightening, evil powers. The film was going to be played late at night so naturally, it was out of question that I saw it. I had piano class the next morning... So desperate was I that I prayed fervently that I could be one of them and get rid of everyone at school. I gleefully imagined how with those super powers I would be able to beam all of them to dust.
It never happened. 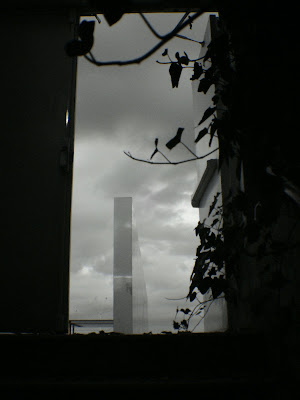 Not many friends are available. They keep cancelling appointments. Dennis is the only one who seems to make an effort. When I hear or read "How long do you stay?" for some reason, I know it means I will not see the person.