I went, I saw, I left.
That's how the trip to Hong Kong felt like. I wish I could have stayed longer, but the workload is too heavy for me to 'waste' one more day (and waste more money, spending time there).
I managed to see a few friends Hong Kong style, ie. 90 minutes or so for each person. As I was about to take the tramway back to my friend Nicolas' place, I called Chet Lam to say hello. He had a photo shooting the next day so the only time to meet was now.
"Come to my place now!!! I have moved into a new flat! It's near where you are staying! Come!!!"
It was nearly midnight. But I was leaving the next day, so why not?
Chet had moved into one of those new luxurious complexes that had grown like mushrooms along the southern coast of the Hong Kong island. It was far from everything, but rich people have cars - or drivers so their last concern is to catch the last train or find the nearest convenient store.
It was as tasteless, garish and tacky as it was luxurious. Something between Willy Wonka's palace and a Las Vegas hotel. The opulence of bad art, glitter, marble and all the shabada nearly made me choke.
"Chinese potato farmer gone rich overnight" I said. Chet laughed at that.
"At least, it's quiet and I have a good view on the sea" he said. Indeed, I could see the chimneys of Lamma Island, not far away.
Of course, with Chet it is always a lot about music. His record collection is impressive. I could stand for hours in front of the shelves and dig out artists I had never heard of.
His new side project will be to do another cover album, this time with all the bombastic power ballads of the 80's.
"Guilty pleasure!" he said as he played them to me.
I remember how Simon would also like to torture me with 80's hit songs. Oh... Chet and Simon are the same age!
I don't know how many album he releases each year... He gave me his latest release: a collaboration with a glamorous female art dealer, an album about the art of love poems in China done in a contemporary setting.
We talked until four in the morning. It was time for me to go home. I could nearly hear the birds starting to chirp in the distance...

I'm always so excited to be in Hong Kong.

I met Jay for lunch. He was working on the Kowloon side of Hong Kong, in Tsim Sha Tsui. He had started to write again, after many years away from his pen, and had lots of questions about music and songwriting.
I also learned that a common friend of ours had cancer - that thing again... and was fighting it with all his might and the most positive attitude he could muster. I never suspected it in our Facebook exchanges. He always seems so healthy, with a drop-dead gorgeous figure. I thought of Pinga. I hope, I hope he will make it. 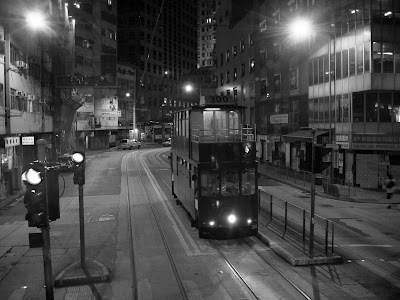 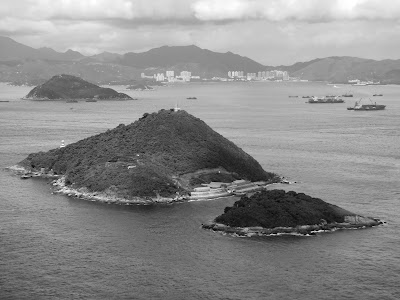 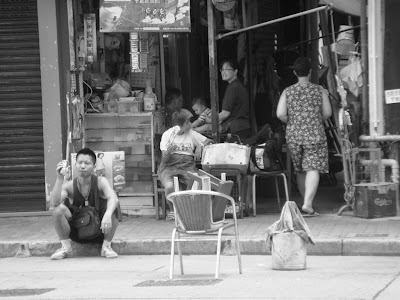 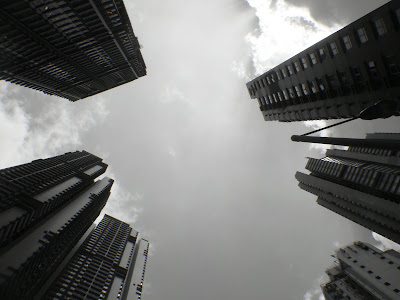 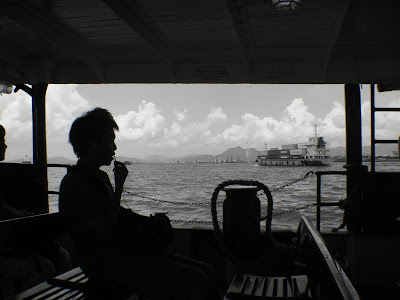 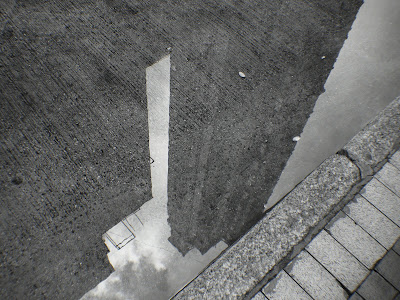 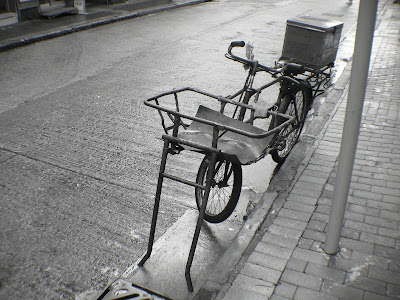 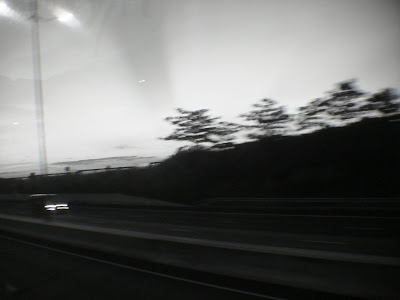 Another casting call from the agency today. I had had no news regarding the previous ones so I didn't know what to do. This time it was an add for a TV commercial, something to do with an insurance company.
"Bring your suit again!" Wayne said.
"It's too big for me. I look stupid in it." I replied.
"Doesn't matter. Bring it anyway. It's some kind of emergency. The shooting will be in Shanghai this Sunday."
Considering the current tension between France and China, I explained to him that I may not get the visa for China. Was it worth going?
...
The casting took place at the other end of the city, of course. As I stepped out of the MTR station I felt a big weight on my neck. A wrung neck? Maybe the exposure to AC and constant temperature changes in Hong Kong... Or maybe like in this film, Shutter where the main character carries the ghost of a dead girlfriend on his shoulder...?
I couldn't find the street. It started to rain. A big storm. Thunder and lightning. I was soaked. No money to take a taxi. I called Wayne to tell him that maybe I would call it a day and go home. But I had only walked a few steps toward the station that I decided against it and asked again for direction. Wayne called me back. I told him I actually was on my way to the casting. He arranged for someone from the company to pick me up.
I put my suit on. Too big. I obviously lost some weight in Taipei. They gave me another one. Too small.
"Just with the shirt is okay."
I did a few video tests. "Turn this way, turn that way". Some photos. "Turn this way, turn that way".
Still something was missing.
"We would like you to have a more Korean style..." the girl said.
They showed one of the pictures that my agent sent them. The one done by Annie.
"See? You look Korean on that one!"
I was given a pair of tight jeans, a short-sleeved grey jacket and a white t-shirt.
"We will try with that"
I did the same video and photo tests. From the girl's smile, it was more convincing. "More Korean!" she said.
Réponse tonight.

I reflected on all the recent events. For the past week, I had done three castings for commercials. Why now? What did it mean? And maybe this shooting in Shanghai on Sunday!
I am slightly confused but I'm ready to embrace whatever comes my way.

The phone just rang. It was FangYi. We'll meet tomorrow afternoon to discuss the music of Oneness.
And I have promised Bryan I would show him some music for his film by the end of the week...
Posted by Aaken at 05:24