Our long time neighbour from the house opposite my parents' committed suicide last Monday and hanged himself after long years of depression, leaving a wife and three children. When she discovered him after an ordinary day at work, it was already four hours two late. The sight of her husband hanging on a scarf dragged her into a nightmare she had long tried to ignore. She lost her sense and started screaming on the street yelling "Why, why, why…"
He had been telling her that he saw no point in keeping on living, words that she discarded as being too dramatic. In spite of her attempts to sustain a sense of normality in the household, all the signs were there, he was taking loads of pills, he had gained weight because of his depression, he was moving extremely slowly and hardly reacted to anything.
I sincerely felt sorry for her. For the past decade or more, she had been taking care of the whole family, working long hours as a medical nurse while her husband was jobless and unable psychologically to find new work. It’s as if all her efforts to maintain even a flicker of life in her husband were as useless as pouring water in a well. She was taken to the hospital where she spent the night. The next day, she was back to herself and ready to face life again. I really admire her.
Mass was given yesterday at the church where my brother got married. The priest would not host the ceremony for it was a suicide case, so a special service was called for that occasion. I was asked to choose the music to be played by the organist. Not a very good one, she was… She played as if she was a first year student, with lots of hesitation and plenty of missed notes, oblivious of the fact that a funeral was being held down at the altar. The two persons who were conducting the ceremony would patiently wait for their accomplice to end her musical mayhem before going on with the next prayer. Their resigned expression seemed to indicate that the situation wasn't new to them. That gave a slight comical touch to the funeral service.
This tragedy shook my father as well. His familiar surrounding is changing. That is something he always found hard to cope with.
Another blow for him was when the neighbour from the house next to my parents' also passed away. He had been sick for a long time but refused any treatment, claiming that he preferred to die a natural death.
His wife who had been impotent for some time already locked herself at home, all shutters down. My mother visited her a couple of times and found the atmosphere particularly bleak. 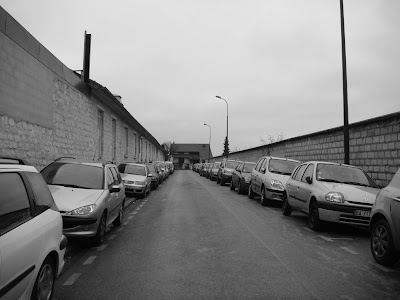 The times are indeed shifting. Everything changes around me. We had a Chinese New Year gathering at my parents’ place yesterday, which left me with an empty feeling. Most of the guests were friends of mine or my brother’s, so even if it was quite pleasant, the Chinese New Year atmosphere was definitely absent. I hardly recognized my brother. I don’t know what will happen in the future when we meet after months or years apart. Will he start to ‘thou’ me? I know he’s glad to see his family, but I have the sad impression that he belongs less and less to our family when I see the strong bonds that tie him to his friends and his wife’s family. He never felt at home with us, I must admit. It was difficult for him to find his place amidst two parents and a brother who all have strong personality. I know it’s a family affair and that blood’s thicker than the mud, though. Quite ironically, she has got closer to us since the marriage…
Had to go to beg for money at the social council this morning. My banker and my landlord are after me with axes in the air! I don’t want to let them ruin my life. There will be a solution. There is also something to figure out in my inability to fit in this material world.
Sometime, I see so many similarities between my life and that of Bach, Molière or Mozart. They went through the same struggle. Is it a consolation? Only if I knew I had their talent!
[…]
Quite fortunately, I changed my album title from Pandemonium to Hyperbody. I found out that the Pet Shop Boys used Pandemonium as the name of their new release. I actually also caught the word Pandemonium used as the title for another album by a rather obscure hip hop band. To think that I was so proud of myself to have found that name! Quick, quick, let’s finish this album and have it released!
As soon as all the songs are done, I will send out copies of the demos to some record companies in the UK, Germany or Belgium.
To bring a feel good note to my otherwise gloomy day, I bought Peter Gabriel and Massive Attack‘s latest albums, respectively Scratch my Back, a collection of covers beautifully arranged for a symphonic orchestra without any drums nor guitars, and Heligoland, Massive Attack’s first studio release in six years. I can’t really say this music brings sunshine in my heart for both albums are quite dark in tone, but I am musically aroused.
Posted by Aaken at 23:11