The first thing that welcomed me: an ad with Andy Lau. Yes I was definitely in Hong Kong! Someone told me he’s everywhere and indeed he is.
The trip went smoothly. I arrived more than early at the airport in spite of the strikes. Jan kindly suggested to drive me to the airport and Nicolas joined for what was to be our last meeting before he goes to the wild American West.
Jan did so well that I had four hours and a half of spare time before the flight!!! Hardly anyone on the road when we expected endless traffic jams.
Being greeted by Andy Lau on my arrival was a good sign for me. I had no idea where I would spend the night, but everything was fine; I was happy to be here.
I had my moments of doubts. My bank account showed a 1200 euro gap compared to last week, I didn’t know what happened, I didn’t know what to do. But something kept telling me: a beginning of a new life has to be a real beginning. I could not bring back old habits and old ways. I will allow myself a few days of aimless loitering before getting started. 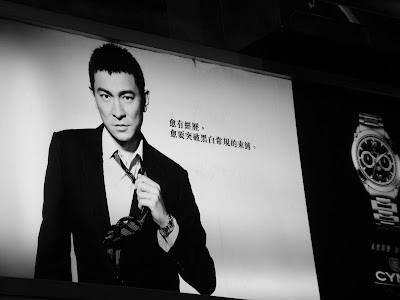 I sat on a bench and called my friend Siu Yung. He had offered to host me very good-naturally. He lives on the Lamma Island, which is a welcome change from the fast paced life of Central Hong Kong. The ferry ride gives you the time to leave this craziness behind and you step into a different world when you leave the boat. Lamma Island is very rural, quite undeveloped. The nights are quiet, I wake up with the song of the birds. Not your usual Parisian pigeons or sparrows.  It’s a whole concert to greet the new day. I open the windows and see amaryllis that grows in the wilderness of a backyard and an abandoned piece of land. If it wasn’t for Siu Yung I may have ended in a love hotel, as one friend suggested. Even though I’m not sure they would accept a ‘normal’ guest. I remember how I in vain tried to book a room in a love hotel in Tokyo…
I don’t do much during the day. Just aimless loitering, watching people, following these endless footbridges that take me from one building to another. The city is impressive, though not so big. What is considered remote here isn’t once you’ve known Paris, New York, London or Tokyo. So this twenty something minute daily ride on the ferry is like taking the metro in Paris. Except that is it more pleasant.
If I needed to feel comforted in my decision to leave Paris, Hong Kong gives me the perfect impetus.
It is sheer idiocy to keep on living in Paris where the cost of life is increasing beyond limits, where I find no possibility to develop my projects and where the global sentiment isn‘t of expansion or growth, but fear and defensiveness.
The days are so beautiful, I will take a walk across the island and maybe have a fresh seafood lunch.  To think that I was freezing on my bike a few days earlier… That’s the wonder of traveling.
Posted by Aaken at 23:54