Gang called at the last moment to ask me whether I wanted to be his companion for a night out at the opera house. There was a Jerome Robbins evening at the Palais Garnier and he had a spare ticket. I hesitated for an instant and gladly accepted. I was stuck with this final scene from the third act that Jo asked me to revise several times, without any satisfying result. A change of air was welcome, even if we were to see dance… And Gang got us seats in the front row, right behind the conductor!
They performed three pieces by Robbins: En Sol, In the Night and The Concert as well as Triade, a new dance piece by Benjamin Millepied - an odd name for a choreographer.
En Sol is choreographed to Ravel’s Concerto en Sol. It was a pleasant piece but I was slightly disturbed by the fact that the pianist, who is the soloist, played as if she were merely a member of the orchestra. Or maybe she wasn’t good enough as a soloist, but that created an imbalance in the music itself and the choreography. The dancers were really good technically but somehow I had the feeling that Robbins’ intentions were left aside. It seemed to me that this piece was about this time when the old world was giving way to the modern world. In Ravel’s music, elements of jazz are whirling and playing with a classical instrumentation and structure. I guess the choreography reflected that as well. However they did it like a ballet and forgot the modernity. Maybe it’s hard to see how modern it is now…
Triade was more interesting for me. It had a strong West Side Story flavour – maybe the lighting design and the costumes - didn't Jerome Robbins do the choreography and shot the best scenes for film?
Musically, it was more familiar territory. Nico Mühly, wrote a score that sounded like a blending of Steve Reich and Philip Glass.
The second part was dedicated to two pieces that Robbins choreographed on music by Chopin. In the Night was… well not really my cup of tea. The dancing was perfect, but I can no longer get aroused by pointes, arabesques, grand jeté and portés… The choice of music by Chopin didn’t help matters. It turned the whole thing into an extremely sweet pastry and it was hard for Gang and I to keep serious in front of such an overdose of sentimentality. I know some people enjoyed it extremely.
The Concert was totally the opposite. The music of Chopin was arranged and orchestrated and served as a musical setting for a farce in which all the clichés about dance and ballet were mocked. We laughed a lot and good-heartedly. The musicians in the orchestras never got to see the show so they were quite frustrated not to be able to know what made us laugh so much. But I saw their smile. At one point, the violinist stood up to have a peak but couldn’t see anything but the stage floor… 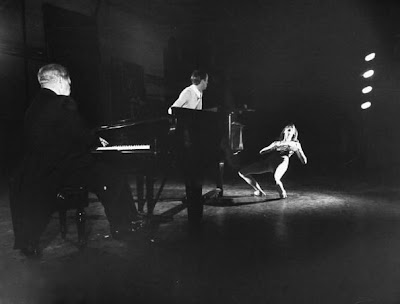 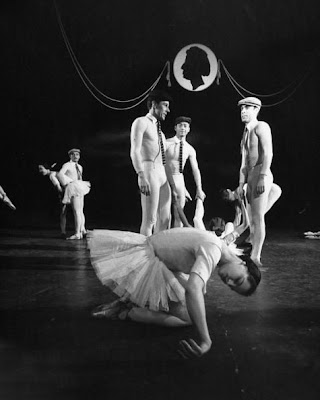 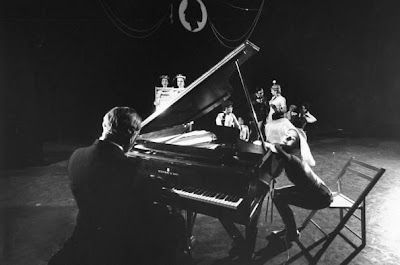